Fend off all foes with Gwent: Rogue Mage's Bulwark Deck 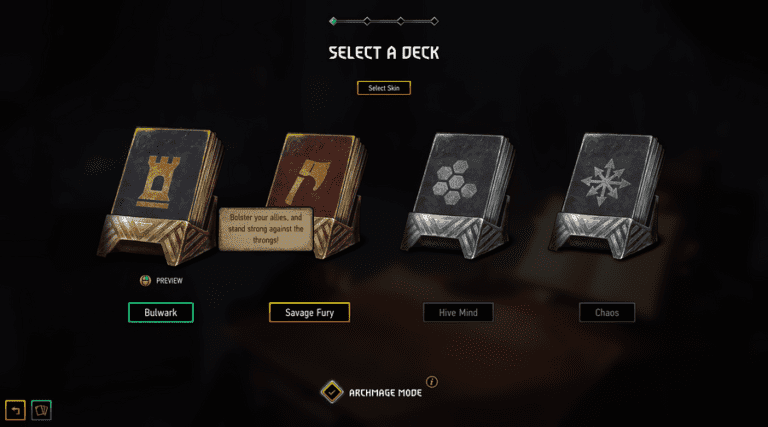 The Gwent: Rogue Mage Bulwark deck is the first you receive and the starter deck.

But, being the first doesn’t mean that this deck is relegated to being for beginners only.

We’ll help you learn the ins and outs of the Gwent: Rogue Mage Bulwark deck’s cards and synergies.

When Deployed, Reynard Odo boosts adjacent units by 1. As long as Reynard Odo remains on the battlefield, any subsequent units are boosted by 1 when they’re played.

Unlike Odo’s passive ability, Vysogota of Corvo comes with an Order ability that boosts an allied unit by 1. This ability costs 1 charge, and 1 charge is gained whenever you play a card.

Vysogota of Corvo has Zeal, allowing it to use its order ability on the same turn that the card is played.

Striking a balance between the Rogue Mage Bulwark deck’s two previous key cards, Aglaïs has both a passive and an order ability.

At the start of the game, Aglaïs boosts itself by 3.

Once per battle, Aglaïs can use its order ability to double the amount of boost on itself.

Like Vysogota of Corvo, Aglaïs comes with the Zeal ability.

When Deployed, the Rogue Mage Bulwark deck’s Zoltan Chivay boosts the power of adjacent units by 4. This boost won’t activate without units to place Zoltan next to.

This unit damages an enemy by 4 when deployed. The damage is boosted to 6 if the chosen unit has armor.

When placed on the battlefield, Tyrconnel spawns a copy of a bronze unit currently in your hand, then gives the copy 2 additional armor.

This Rogue Mage Bulwark card deals 1 damage to an enemy unit chosen at random whenever it receives a buff from any source.

The drummer boosts the unit directly to its right by 1 at the end of each of your turns.

The Mauler has an order ability that damages an enemy unit by 1 once per battle. This damage increases equal to the amount of boost on the Aedirnian Mauler when its order is activated.

This Rogue Mage Bulwark unit boosts an allied unit on the battlefield by 3, and a random unit currently in your hand by 1 when deployed.

Many decks that you’ll encounter in Gwent: Rogue Mage are based around debuffing and debilitating the opponent.

Bulwark takes the opposite approach, boosting the power and armor of your units wherever possible. While foes may chip away at your flanks, Bulwark stands strong with imposing cards that support and boost one another.

Another important component of the Rogue Mage Bulwark deck is its ability to deal damage to enemy units, removing them from the board entirely. This synergizes well with Bulwark’s buffing strategy, as many of the deck’s damaging components rely on boosts to activate.

The Tridam Infantry provides a steady source of damage whenever boosted by a spell or unit, and the Aedirnian Mauler can build itself up into a force to be feared, then deal damage equal to its current power.

The base deck of Bulwark is constructed in such a way that its damaging and buffing components function together from the get-go, allowing you to improve and perfect this function over time.

The most basic combo to come up in Bulwark is placing a Temerian Drummer to the left of Tridam Infantry. The drummer buffs the infantry at the end of each turn, activating the infantry’s ability and whittling the enemy down by 1 damage every round. As the Tridam Infantry’s ability isn’t capped, any other buffs activated in the same round still trigger the damage, allowing you to quickly chip away at the enemy’s units and score.

Stacking the Aedirnian Mauler with buffs before using its order ability is also a reliable way to take a powerful enemy unit off the board. This unit’s power can quickly reach double digits and destroy all but the hardiest foe. If you’ve drawn Syanna while progressing across the map, that unit’s order ability lets you deal the mauler’s devastating damage twice

That does it for our Gwent: Rogue Mage Decklist. Best of luck out there.