FAZE Clan will be teaming up streamers and soccer superstars in this latest charity stream, playing Fortnite. 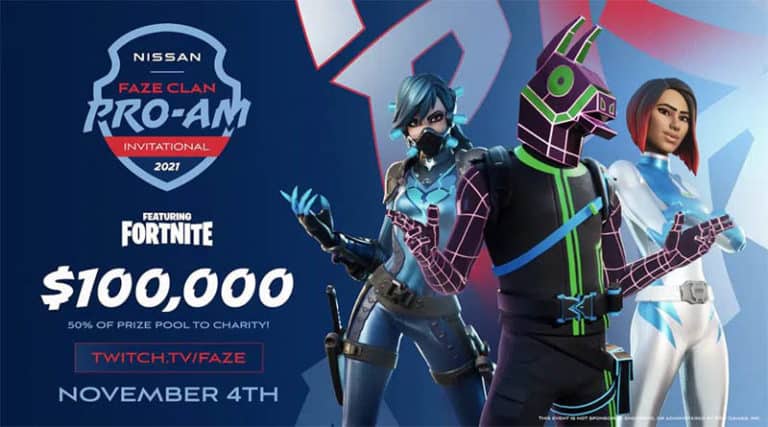 Save the date, FaZe Clan is hosting a charity Fortnite tournament on November the 4th that will include superstar streamers, gamers, and even Manchester City footballers. With a ton of cash up for grabs for the competitors, as well as a healthy amount of the prize pot going direct to charity the event is going to be a big one.

How much will the winner of the FaZe Nissan tournament win?

The $100000 prize pool for the FaZe Nissan tournament will see half of that amount given to charity. There is no word on how the remainder of the cash prize will be split at this stage.

What teams are in the FaZe Nissan tournament?

The complete lineup is yet to be revealed but far we have confirmed:

Where to watch the Faze Nissan Charity Tournament

You will be able to watch the whole thing on FaZe Clan’s Twitch channel and we are expecting there to be more coverage, certainly from the Man City side of things.

Who are FaZe Clan?

FaZe has been in the news most recently for taking the esports franchise public with a stock merger, but prior to that had found itself embroiled in a charity scandal that saw the popular Faze Kay booted out of the organization and several others suspended for pulling what looked like a ‘pump and dump’ cryptocurrency scam where fans were lured by huge influencers to buy into a crypto coin called $ave the Kids, which promised money to children’s charities, before Kay and other team members sold large amounts of the coin as it launched, causing it to crash in value and become worthless, despite them being involved in promoting it. In other words, they “pumped” the value of the coin by promoting it and then “dumped” it as soon as other people bought in order to make a potentially huge amount of money.

(Frazier) Kay has denied all of this of course but blockchain experts have cast serious doubt on his side of the story. Anyway, he got kicked out, and FaZe clan faced a huge public backlash so needs to be seen to be promoting itself in a good light now.