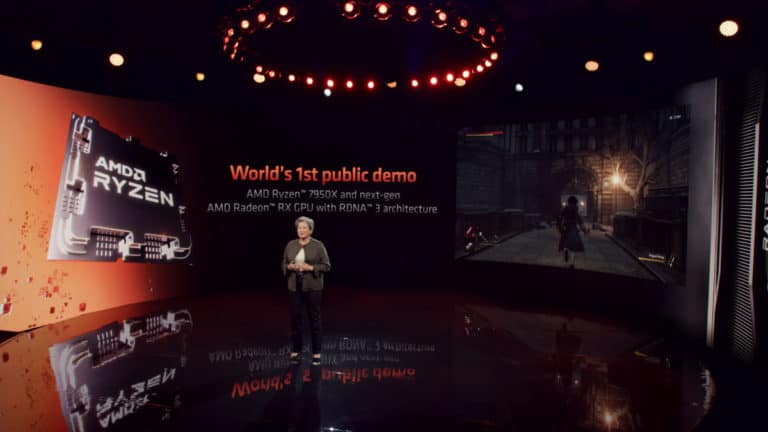 During the AMD Ryzen 7000 series reveal, not to be confused with Radeon RX 7000, an RDNA 3 GPU has been showcased. With a glimpse of the design and sine gameplay displayed.

We don’t get much additional information from the teaser image on the new design of the graphics cards. It shows a simple black design similar to the Midnight Black of the RX 6X50 XT cards.

There is no show of how many power connectors the card features. Although we are expecting it to not feature the new 16-pin connector like in the RTX 3090 Ti.

The design also shows the thickening of the cooler, which is expected with the increasing TDP of the cards. Although, you can find a red stripe on a few of the fins on the side of the card.

Although there is no extra information on what we can expect to feature in the RX 7000 series lineup Dr. Lisa Su has confirmed it is in testing currently in the labs.

It was also showcased alongside the 7950X in a Lies of P demo. The new GPU and CPU combo worked at 4k at ultra settings to show off the graphics. Although there are no certain performance metrics for the preproduction hardware.

It does restate that the upcoming RDNA 3 will provide 50% improved performance per Watt over the RDNA 2 cards. Possibly trying to make sure we don’t get scared by the increased power usage of the cards.

As a remark to the delays of Intel Arc, AMD has also stated it is on track to release when it said it would be by the end of 2022. The latest rumors on the fact suggest that they will launch somewhere from October to mid-November.

This will give you at least a month after the launch on its CPUs to save up again to pair your AM5 hardware with a new GPU.