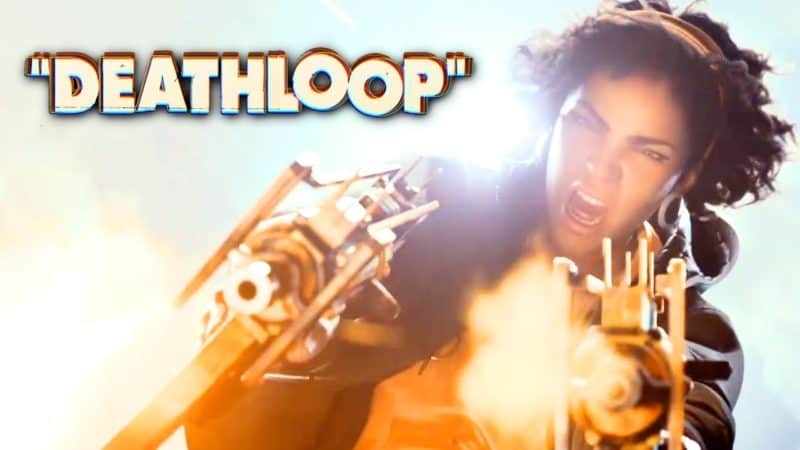 Arkane Lyon, the studio responsible for gaming delights such as Dishonored and BioShock 2, took to the stage during the Bethesda conference at E3 to unwrap a new game dubbed Deathloop. Arkane dropped a lavish teaser trailer for the occasion coursing with grindhouse chic.

As far as we can decipher, Deathloop has two highly-skilled assassin’s pitted against each other in an endless cycle – a tautological and bloody Ground Day – that resets each time one of them dies. The duo of protagonists each want a different outcome; Colt vows to break and put an end to the cycle, while Julianna strives to protect and keep it intact. The reasons behind these differing aims remain shrouded in mystery for the moment.

The action takes place on the unruly island of Blackreef, a once paradise littered with rugged cliffs, wind-swept meadows, concrete sound mirrors, and an urban area seemingly stylized on We Happy Few. An imposing circular structure dominates the landscape and appears to be drawing in energy. Presumably, the monument plays a crucial role in the time loop. Colt sees Blackreef as a prison, while Julianna sees it as pure freedom.

As for gameplay, we know Deathloop is a first-person action game with Arkane DNA. Players can expect ‘’an immersive gameplay experience that lets you approach every situation any way you like.’’

Much of the action centers on combat between the two assassins and other targets scattered around Blackreef. As we see in the trailer, both characters die multiple times in quick succession from melee attacks, weapons, and telekinetic powers. Repeated deaths are expected and will form a core part of the gameplay loop, hence the name Deathloop.

The trailer is Arkane’s first mention of Deathloop, so details are lacking when it comes to platforms and release date. As for actual gameplay footage, we imagine it’s still a long way off at this point, sadly.

If Arkane can match the quality of the phenomenal Dishonored, we are in for a treat.