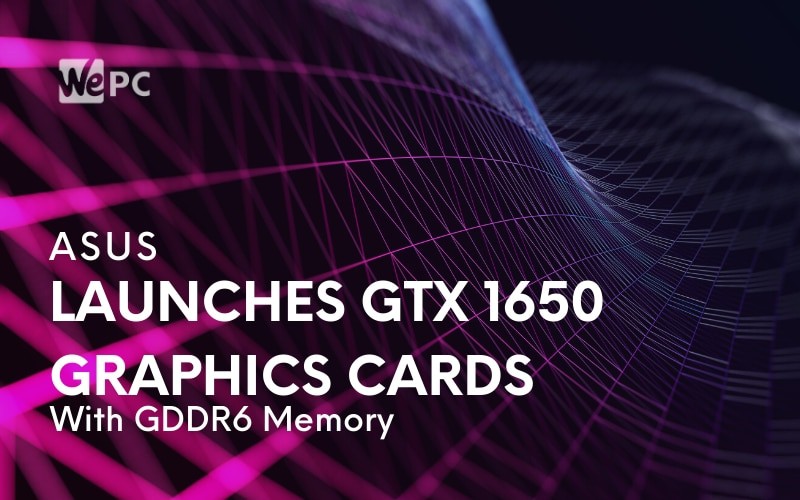 ASUS has recently announced that Nvidia GeForce GTX 1650 graphics cards with new and improved memory will be coming to the ROG Strix, TUF Gaming, and Phoenix lines.

Similar announcements have also come from MSI and Gigabyte over the past few months.

How Has Performance Improved With The Addition Of GDDR6?

Previously, GeForce GTX 1650 cards came with GDDR5 memory and the upgrade to GDDR6 means there will be around a 50% increase in bandwidth.

This new and improved memory will be available in the following lines which have received some tweaks in terms of cooling and design.

With ROG Strix graphics cards, gamers can alter settings with the GPU Tweak software to have total control over performance. A previously known heating problem has also been fixed with the use of DirectCU II heating pipes which carry the heat to a fin array. This is then cooled down by the 2 Axial Tech fans.

In the TUF Gaming graphics cards, these are built with Auto-Extreme Technology which prevents PCB flex with a rigid backplate for extra durability. This series even uses something referred to as “space-grade lubricant” to seal it according to IPX5 standards.

These cards are better suited to smaller gaming PCs and feature compact designs for a 2x longer lifespan. With less space, the Phoenix cards still manage to keep cool with a little help from Axial fans and the same space-grade lubricant used in the TUF Gaming cards.

As Phoenix cards are typically good performers in the budget GPU category, an increase in bandwidth is only going to improve this card’s value for money.

This is great news for ASUS whose cards are typically some of the highest performers we’ve seen in our ‘best of’ graphics card guides. You can find our best GTX 1650 graphics cards review here.