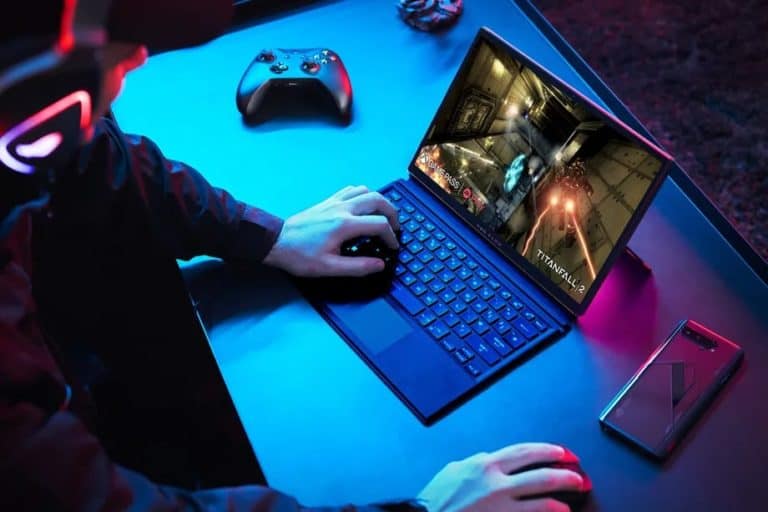 Announced at CES 2022, ASUS is looking to beef up their laptop portfolio with one very unique proposition. Named the ROG Flow, this laptop comes in at 13.4-inches and comes with a kickstand and a thin form factor. Sounds a lot like Apple’s iPad Pro, right? But here’s the twist. The ROG Flow Z13 is packing a Core i9-12900H processor in tandem with an Nvidia RTX 3050 Ti, which is all sandwiched into an impossibly thin 12mm tablet form factor. This is something that we’ve frankly never seen before in the world of PC hardware, this much power being crammed into a tiny form-factor like this, makes gaming on the go with a fantastic display possible for everyone, if you’ve got the cash.

The Z13 also possesses a few other tricks up its sleeve, including support for DDR5 RAM in addition to PCIe 4.0 Storage. It’s worth nothing that the Z13 is one of the freshest ideas that we’ve seen in the gaming laptop space in quite some time, and through external ports on the device itself, you could even connect it to the XG Mobile eGPU from ASUS to beef up the power even more with everything up to a 3080.

In addition to this, the Z13 Flow also possesses a 1080p display with a 120Hz refresh rate. On systems that aren’t too big, a 1080p display isn’t too bad, especially since this one has 100% sRGB coverage in addition to 500 nits of peak brightness. But for the resolution junkies out there, you can also get this laptop equipped with a 4K display and 60 Hz refresh rate. They’re both covered in Gorilla Glass and also have a 16:10 aspect ratio.

An interesting note about the Flow Z13 is that it’s structurally similar to a Microsoft Surface tablet, it has a keyboard that can be stowed away, and despite the tiny form factor of the device itself, it still has per-key RGB lighting, which is something of a marvel in of itself in a device that thin. With additional ROG accenting on the back, and a clear window where you can see the internals on the back of the device, lit up by ARGB LEDs, this system is something of a stunner, and looks fantastic, even with all the ‘gamer’ noise going on in the design. You can tell this laptop is different to the rest, even at a quick glance.

This follows through to the IO, where you get a Thunderbolt 4.0 port with Displayport 1.4 support, and can also give you 100W PD charging, with another USB C 3.2 Gen 2 (these names are really confusing, blame the USB consortium) for a bit of extra oomph. There is also an eGPU port, USB-A 2.0, a MicroSD reader, an HDMI 2.0 port and a headphone jack.

We’re still waiting to hear more from ASUS about the ROG Flow Z13 laptop, but until then, its competitors are going to be the likes of the Razer Blades, Acer Predator and Nitro 5 systems, all of which have gotten refreshes for 2022, just like the ROG Flow Z13.

With the Z13 available from Q1 to Q2 2022, this looks to be one of the gaming laptops that you absolutely need to look out for if you’ve got the cash. We’ll be sure to keep our eyes glued for more news on this stunner of a system.