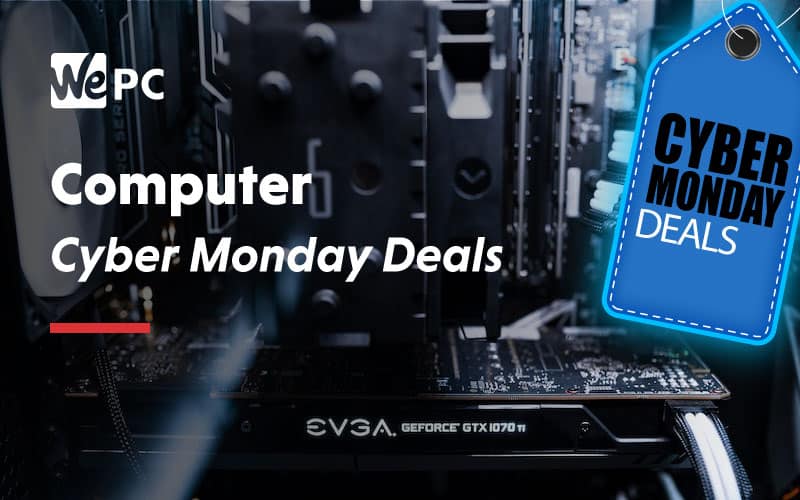 Just when you think Black Friday is over, Cyber Monday approaches. Consumers love a bargain and when it comes to computer-related tech, we would all like to make some decent savings. The team at WePC is going to be scouring the web looking for the best Cyber Monday computer deals when the time comes.

Take the load off and don't panic as we bring the best deals out there straight to you, all in one place.

When Cyber Monday finally arrives, it can be a bit overwhelming finding the best deals (there are thousands). Sifting through to find the best deal for you can be a chore but we all want to take advantage of the savings. Cyber Monday was the original online retail event that wanted a bit of the Black Friday pie, but now it is more or less the same event.  If you are looking for a new gaming monitor, a new gaming PC or a discounted laptop, there are some superb deals to be had.

To smooth this process on the day and make things a bit easier, we are going to bring you the various deals and split them into categories, so you don't miss out.

This section is where you are going to find all the best Cyber Monday computer deals when the time comes. we have split it into categories to speed your search up!

There are going to be many different computer building companies offering older specification gaming computers up at lower prices when Cyber Monday comes. Watch this space and get your self a new battle machine on the cheap.

For those who prefer the low profile/ small form gaming laptop, you are going to love Cyber Monday. Just like the pre-built computers, old spec gaming laptops will be up for grabs at bargain prices.

Whether you are just on the hunt for great deals or actually need some extra storage, Cyber Monday is the time to buy. SSD's and HDD's will be slashed in price, giving you more terabytes for your buck.

With new graphics cards being released annually it will be no surprise to see older graphics cards get a drastic discount and even a few newer architecture cards getting a discount too. These will be highly sought after so make sure to bookmark this page and grab the GPU of your dreams.

On the lookout for a new keyboard or mouse? Well, Cyber Monday will bring about a multitude of computer accessories deals from a wide selection of manufacturers.

Looking for a new gaming monitor for console or PC? Cyber Monday always brings some fantastic display deals and 2019 is going to be no different. From 4K gaming monitors to 240Hz refresh rates, we will have them all.

Where To Find The Best Cyber Monday Computer Deals

As mentioned finding the best deals can be tough, I mean, where do you begin? we are going to take a few of these worries away by not only researching what the best of the deals are but bringing them to your attention too so all you have to do is click. Now you don't have to venture out in the world with all those bargain-hunting nutters, so sit back and relax.

Marketplace giants Amazon always has some excellent products and discounts to boot. There is a wide variety of tech goods on Amazon so it is certainly one of the better retailers to use over the sale event.

With a large range of tech-related products, we will be expecting big discounts from Best Buy. For anything from tablets to computer accessories, they have it.

Newegg is similar to Amazon and if 2018 is anything to go by, there will be some great Cyber Monday computer deals coming.

Walmart is more known for its stores but the retailers are offering some crazy deals with Black Friday and Cyber Monday hit. You won't have to elbow people out of the way this time though as you can do it straight from the armchair.

iBUYPOWER will be getting involved in Cyber Monday again bringing discounted gaming PC's into the mix. The computer building company will also have featured discounts on older spec laptops too!

With a large amount of older spec gaming PC's about you can be sure CyberPowerPC is going to have some great deals when Cyber Monday hits. We all love a discount on gaming rigs!

In 2018 we saw some brilliant deals over Black Friday and Cyber Monday. We, of course, will be hoping for more of the same this year. To get ready for December 2nd, 2019, Let's have a look at some of the best Cyber Monday computer deals from last year.

Cyber Monday is a great day for tech deal lovers, so start preparing now and decide what you want in advance. Finding the best cyber Monday computer deals can sometimes be a pain but the team at WePC want to take that stress away and bring the very best straight to you.

Don't forget to bookmark this page ready for the day and leave a comment below on what you hope to see discounted.