Poor old Jonesy just can’t catch a break, as he’s swept away by this cinematic look at the next Chapter 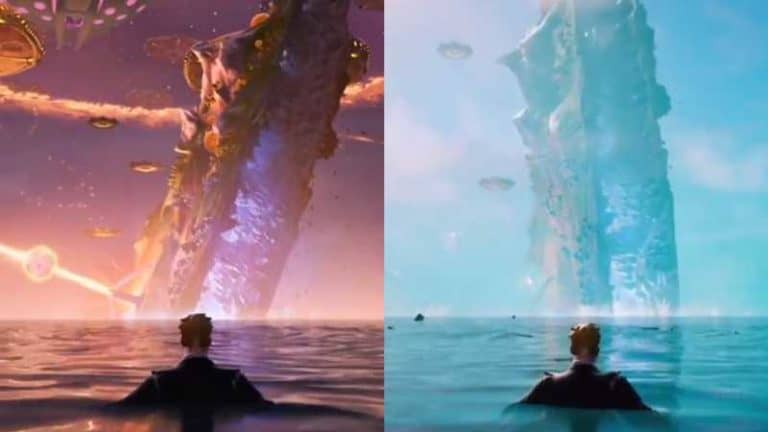 Warning, there are big spoilers ahead, so if you don’t want to see what might be coming up in Chapter 3 of Fortnite, turn away now.

On December 2nd, 2021, an ad was released on TikTok in error that showed an official teaser trailer for Chapter 3 of Fortnite, ahead of its launch sometime around December 6th. On the same day, Dwayne “The Rock” Johnson shared a video on his Twitter profile, seemingly confirming his role as Fortnite Character The Foundation. A big day for Fortnite reveals.

The trailer was discovered on TikTok by Fortnite leaker FreddyTheFox_YT when it appeared on his feed as an ad. Of course he was quick to record and share it to the world. If you haven’t already seen it and want to, check out the tweet below.

The 30-second clip shows another small glimpse into the ever-evolving Fortnite lore. This time, what looks like the Zero Point orb crashes down on Apollo Island with catastrophic consequences, spelling the end of Chapter 2. In a stunningly cinematic scene which hints at what we might expect from The End, we then see Jonesy floating in endless water under a purple sky, a convoy of imposing UFOs flying above his head, and Apollo Island in front of him…. on it’s side. The resulting impact from the orb quite literally flips the Island over, finally revealing the all-new Chapter 3 map and engulfing poor Jonesy in waves.

What does the trailer reveal?

While the trailer doesn’t technically reveal anything, and we can only speculate about what we think we can see in the short video, of course the theories are already flooding the socials.

The Cube Queen and an ominous onslaught of UFOs

Firstly, what does this reveal about The End and The Cube Queen? Is she in that Purple, spherical mothership in the sky? The panel on the front certainly seems to resemble the yellow orb she currently resides in.

What about all those UFOs? In a scene reminiscent of Season 7, the sky in the video is filled with UFOs, all resembling the Mothership that we thought we defeated at the start of Season 8. What did we start when we blew up that ship?

Then, there’s the Zero Point. The orb can be seen in the back of the very sci-fi scene, before erupting into a flash of light, before the UFOs and the mothership are sucked into a rift. This is how the Zero Point has behaved before, but to which dimension does it send them all and, more importantly, can they come back?

Then there’s the map. As Apollo completely overturns, we can just about make out a few features on what we can only assume is going to be the next Fortnite island. For the most part, what we can see appears to be a desert, reminiscent of Chapter 1 Season 5’s Paradise Palms. Some of the older rumors about Chapter 3 Season 1 included cowboy and desert themes, so could we be seeing a return to the Wild West as part of Chapter 3, perhaps? Yes, most of the rumors at the moment revolve around a Spiderman themed season, but there’s definitely room for both. In other words, if I don’t see a Web-Slinger skin in Fortnite this Season, I’m rage-quitting.

The Rock is The Foundation

In the other big Fortnite news of December 2nd, The Rock seemed to confirm his role as The Foundation in Fortnite. Players have speculated since The Foundation was drafted in by Jonesy during the Zero Crisis finale that his voice belonged to The Rock, but it has never been officially confirmed. However, in a new video promoting his ZOA energy drink, not only did Dwayne Johnson throw around a few Fortnite terms, but he also gave a very intentional glimpse of The Foundation’s helmet in his drinks fridge. If that doesn’t confirm that he IS The Foundation, nothing will.