CES 2021 has brought a big announcement from Intel regarding its upcoming Rocket Lake-S processors. Whilst we don’t have the full specifications of the new CPUs yet, Intel has revealed quite a bit of information about them, including a comparative performance chart of the Intel i9-11900K vs AMD’s 5900X, the flagship gaming CPU of AMD’s 5000 series. Indeed, Intel claims to knock the 5900X off the top spot for the coveted title of best gaming CPU.

The current rumored release is sometime around mid-March 2021, but Intel has yet to confirm this or give an idea as to the RRP. Let’s take a look through what we do know! 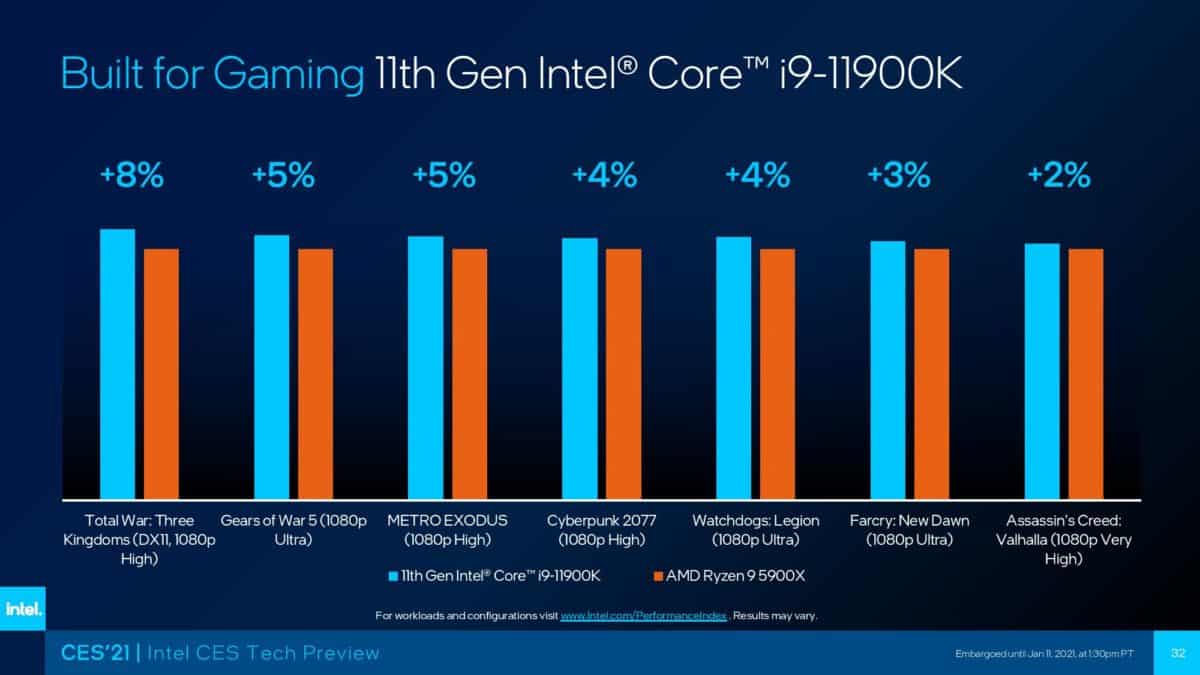 As you can see from the above image, as released by Intel at CES 2021 on January 11th, 2021, Intel is claiming modest gains over the flagship gaming CPU of their rival AMD, namely the Ryzen 9 5900X. Obviously, the usual caveats apply about needing to wait for independent benchmarking before we know if we can trust any of the above. Additionally, we only have comparative performance at 1080p. It is likely that at higher resolutions the Zen 3 architecture of the AMD CPUs will perform better. On the other hand, in Intel’s favor is the fact that their CPUs have historically seen substantially greater performance enhancement through overclocking – the above figures only show both CPUs running at stock settings. We will have to wait until release before we can test these theories ourselves. Of course one of the big considerations will be how the Intel CPU is priced compared to its rival, and on this, we still have no word from Intel.

As you can see from the above table, the Boost clock speed of the i9-11900K matches that of its older generation predecessors, the Intel Core i9-10900K / F, though we do not yet know what the base clock of the new CPU. Nevertheless, whilst the clock speed/CPU frequency may be the same (i.e. the speed at which instructions are sent) the claimed IPC uplift of 19% means the new Intel processors can send more instructions at any one time, hence the increase in performance.

The second thing to note is that the Intel Core i9-11900K actually has 2 fewer cores than its i9-10900K predecessor, and this is essentially due to Intel “backporting” newer technology they’ve developed on the 10nm process node onto the older 14nm process node on which the new CPU is based. A larger process node size means less space for cores, hence the reduction.

Intel has likely resorted to doing this for several reasons. Firstly, supply shortages for the 10nm process node mean laptops will have taken priority for this technology: laptops are more reliant on the smaller process to save on space, which is obviously at a premium in laptop design. Secondly, it seems as if Intel may be struggling to get good enough yields in its manufacturing of the smaller 10nm process at this stage (i.e. too many defects per area of silicon), meaning its less profitable for them to use 10nm until the efficiency of the technology is improved.

Fewer cores is less important for gaming, but more of a concern for productivity and workstation tasks. Intel claims that other technological improvements should offset the removal of the two cores, but it remains to be seen whether this is true.

Regardless, as should come as no surprise, Intel won’t be challenging AMD’s dominance in the workstation and productivity space any time soon.

The new Intel CPUs  Rocket Lake-S CPUs are backward compatible with most 400-series chipsets but not H410 and B460 chipsets.

For all Rocket Lake-S chips, RAM support has improved to match AMD’s latest offerings: jumping from DDR4-2933 to DDR4-3200.

20 lanes of PCIe is now supported for Rocket Lake-S processors. PCIe 4.0 connections will of course only work on those motherboards which support the interface. The number of lanes on the DMI connection has also been increased from 4x to 8x which should reduce bottleneck for SSDs in RAID and the like. This only applies to B560 and H510 motherboards however: 500 and 400 series motherboards will still only have access to 4x DMI lanes.

This has been our rundown of the latest news from CES 2021 regarding the Intel Rocket Lake-S Core i9-11900K CPU. Stay tuned for more articles on all the biggest tech and gaming news from the event! 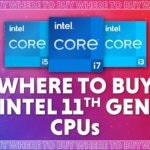