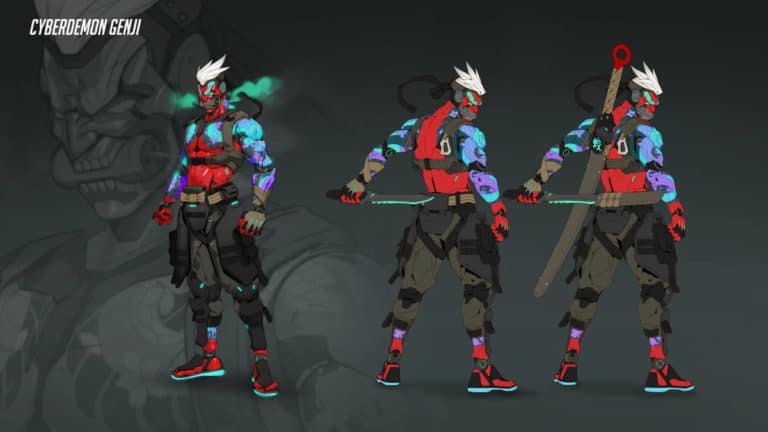 Table of Contents hide
What are Overwatch 2 Mythic Skins?

Blizzard Entertainment has revealed an all-new type of cosmetic coming to Overwatch, which are Mythic skins. The Overwatch 2 Mythic Skins is a new tier of skin, and Blizzard plans to launch one every season. The news came as part of the recent Overwatch 2 reveal event on June 16.

What are Overwatch 2 Mythic Skins?

The Overwatch 2 Mythic Skins is a new tier of cosmetics that is going to be a part of the new seasonal cycle of Overwatch 2. Every season will get a new mythic skin, giving players something new to get their hands on if they so wish.

For Season 1 Blizzard Entertainment has revealed what the skins are already, with a concept art look at Cyberdemon Genji, the first seasonal mythic skins.

So far, the skins show off that there is a high degree of customization with them. Players will be able to change Genji’s mask, along with the tattoo and the color of the skin, from several options for each module. It means there are plenty of different options for players to run with, and everyone who uses this skin may find a unique style to make their skin stand out from the rest.

In addition, we know the Overwatch 2 mythic skins will have greater detail than your purple or legendary skins. There is going to be better pixel quality, visual effects, and more. All in all, these skins should stand out much better than other skins in the game previously.

In the instance of Cyberdemon Genji, pressing the ult key opens the mask, revealing a demonic cyberpunk-looking face behind it. Enji’s mask never opened up before, so this skin will have something entirely new for players to experience as they embed fear into their enemies.

As for how you get the Mythic skins, it remains a mystery. Blizzard has yet to comment on how you unlock them. They could be a feature in the shop that will cost a fair amount of money, or they could be the final unlock at the end of a seasonal battle pass. Hopefully, Blizzard announces how you unlock mythic skins in the months to come as we get ever closer to the Overwatch 2 free-to-play multiplayer release date.