It appears Skull and Bones gameplay leaks have emerged. 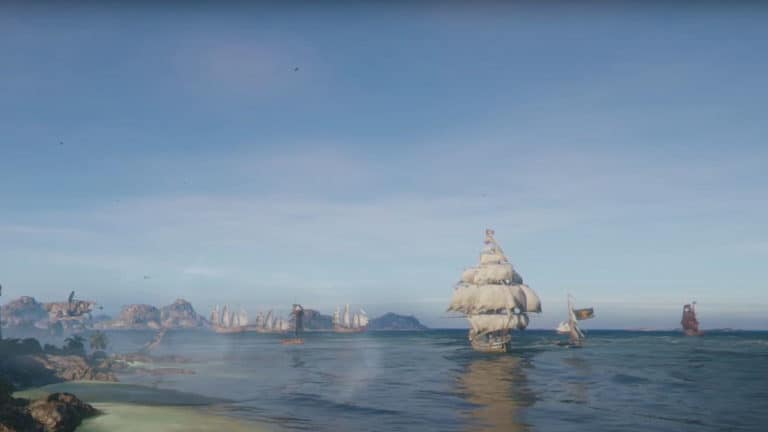 One leaker has thrown the new Skull and Bonus gameplay leak onto Reddit, with a 4 min tutorial video showcasing what the game is all about.

There seem to be several Skull and Bones gameplay elements revealed during the technical demo. The core gameplay is a progression system in a seemingly always online open world. You start off with a basic ship, which you can later get more ships as you get resources and improve your infamy, aka a player level.

Your ship also has a weight system weapon slots, crew, and many different upgrades you can slap onto it. These can be anything from personal improvements to make the ship better, or stylization to improve your playstyle.

Managing morale and inventory is a big part of the Skull and Bones gameplay leak. Failing to manage your crew’s morale means you will face a mutiny and lose control of your ship. So, stock up on food and drink to keep them happy. In addition, make sure you have cannonballs and repair kits so you can fight back and repair; otherwise, your pirate ship will sink.

If you do happen to sink, then you can respawn and head back to your wreck. You can retrieve most of the inventory you had while on the seas. However, other players can swoop in and steal your prizes.

Through the game, you will need to take missions from pirate bases and outposts. These missions get your infamy level up. You can go in the world and find islands to collect animal hide, lumber, ore, fibre, food and drink. The gathering part is the more grindy part of the game you need to overcome to progress your ship’s quality.

If you’re more of a violent pirate, you can ambush NPC trading ships or military fleets. You can even encounter AI privateers that will hunt you down if you pray on merchant’s vessels.

As your skill and ship progressions grow better, there are world events. Perhaps a fleet of lines has gone by, and you want to ambush it and its escort. Perhaps there’s a mega gold ship protected by a fleet. All is for the taking in the game.

The trailer also mentions that the game’s content can be done easily through solo play. But, if you want to party up with a stranger or invite friends, the options are there.

However, it doesn’t seem like there is actual combat in the game, at least not what you directly control. Perhaps that is a feature missing from the trailer?

Just remember, all of these Skull and Bones gameplay leaks are subject to change. The game appears to still be in a technical alpha state. We will more than likely see some form of change or another before Ubisoft are officially ready to unveil it legitimately to the world.