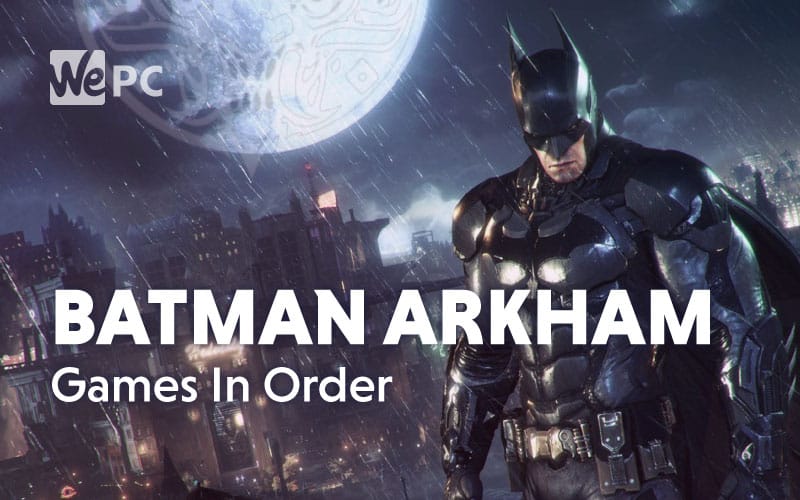 The dark world of Gotham City and Batman’s story has been adapted into many different forms of media over the years, including movies, TV, and of course, games.

With dozens of game adaptations released across consoles, we’d be here all day if we listed every single Batman game ever created. In this article, we will be going through the Batman Arkham games in order of release date to give you a little rundown on what to expect in each game if you’re considering a new Batman game to play.

First of all, the game that kicked off the Arkham series, Arkham Asylum. This was the first title in the series and saw Batman battle his archenemy, the Joker.

The story follows the Joker’s attempt to seize control of Arkham Asylum and to trap Batman inside with his many enemies.

The game has many recognizable voices, from actors who have appeared in the DC Animated Universe, including Kevin Conroy as Batman, Mark Hamill as the Joker and Arleen Sorkin as Harley Quinn.

Played in a third-person perspective, the game allows you to explore Batman’s fighting, stealth, and detective skills as he explores Arkham Asylum. Batman can run, jump, climb, glide with his cape, and use his grapple gun to climb up higher structures.

Aside from the main story, there are plenty of side missions that allow you to unlock additional content and collectible items.

Players can use Batman’s Detective Vision, which is a visual mode that provides you with contextual information about your surroundings. This can also be used to highlight how many enemies are near you. It also helps you find interactive objects and gives you information to help you identify footprints, clues, and to solve puzzles.

In this installment, the story follows Batman, who is trapped in Arkham City, a super-prison located in the decaying slums of Gotham City. Batman must uncover the secrets of the facility, which is overseen by the warden Hugo Strange.

The gameplay is similar to the previous installment, and voice actors Kevin Conroy and Mark Hamill reprise their roles as Batman and the Joker. You will also get a chance to play as Batman’s ally Catwoman who has her own story running parallel to the main plot.

Arkham City is an open-world game that allows the player to freely roam anywhere within the boundaries of the game.

The Detective Vision mode makes a reappearance, and you also have access to a criminal database that you can access to help you solve puzzles and gain vital information.

In this game, you will also be able to build experience points that allow you to level-up Batman and purchase upgrades to gadgets, including the Batsuit.

While this is the third installment in the Arkham series, Batman: Arkham Origins takes place five years before the events of the 2009 Batman: Arkham Asylum game. This prequel title was developed by WB Games Montreal, rather than Rocksteady Studios, who produced the others.

In this prequel game, you get to meet a younger, less experienced Batman as he battles with the notorious crime lord Black Mask. Black Mask has placed a bounty on Batman’s head and called on eight of the world’s greatest assassins to come to Gotham to defeat Batman.

Batman: Arkham Origins is the first game in the Arkham series to feature a multiplayer mode, which allows players to engage in a huge gang war between the Joker and Bane.

Arkham Origins is another open-world title that allows you to explore the world of Gotham City. You’ll be able to undertake missions such as helping the GCPD solve crimes as well as meet characters, including the famed supervillains Gotham is well known for.

Making a jump back to the original timeline, Rocksteady Studios returned to develop Batman: Arkham Knight which takes place nine months after the events of the 2011 game Batman: Arkham City.

This game follows the same style of gameplay, mechanics, and combat style as the previous games as well as being another open-world title. One of the most notable changes is that this is the title where the famed Batmobile is finally introduced as a playable vehicle. The Batmobile can be used for combat, solving puzzles and, of course transporting yourself around Gotham City.

The introduction of the Batmobile resulted in a lot of changes to the way the game was designed. Previous designs of the city made the streets too narrow and confined to allow the Batmobile to travel smoothly throughout the city.

Travel throughout Gotham City isn’t just limited to the Batmobile; you can also glide through the air using Batman’s cape, which can now be used for even longer flights and higher climbs.

Plenty of the gadgets previously appearing in other Arkham games returned for this title, including the batarangs, grapple gun, line launcher, Detective Vision, and Remote Hacking. A new gadget includes the Voice Synthesizer, which allows you to imitate other character’s voices to lead enemies into traps.

Another great feature of Arkham Knight is the Dual Play mode, which allows players to seamlessly switch between playing as Batman and one of his allies, such as Catwoman, Robin, or Nightwing during certain events in the game.

That’s all the Arkham games, for now, available across platforms. However, there are plenty of other Batman games available from different series and on mobile devices too.

This is a great series to get stuck into if you’re a fan of the Batman comics or movies and want to see more of Gotham City and its supervillains.

Which one is your favorite on the list? Do you recommend any other Batman series such as Telltale or Lego Batman? Let us know in the comments below; we love hearing about what games you recommend.