Pokemon Unite just received a new update that introduced Espeon to the game. 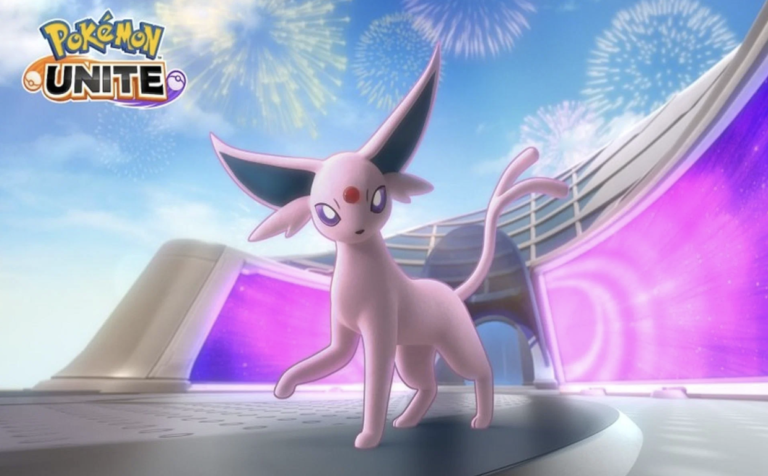 Pokemon Unite just received a new update that introduced Espeon to the game. Starting today (May 16th) players can complete missions and unlock Espeon’s Unite License. Players have until June 16 to unlock Espeon after which it will no longer be obtainable as part of the promotional event. Once the event ends, players can still unlock Espeon by using Aeos Gems or Aeos Coins.

Espeon can use Future Sight to have the user lock on to an opposing Pokemon, then deal damage a few seconds later to opposing Pokemon in an area of effect centered on the locked-on Pokemon. More damage is dealt the lower the locked-on Pokemon’s remaining HP is which is a very interesting mechanic as it allows Espeon to quickly assassinate low HP foes.

In addition to the new Pokemon making it to the game, it also brought some new holowear with it. According to the official Pokemon Unite Twitter account, you will need to obtain a total of 2,000 mission points if you want to get access to the Trainer License. If you do not want to go through all of the grind, you can also obtain the Espeon for 575 Aeon Coins immediately via the in-game store. The new Attacker also has a special holowear that you can grab to turn up the fashion quotient.

Delphox is Expected to be The Next Release

After Espeon, Delphox is expected to enter Pokemon Unite next. Delphox will arrive on June 9 with new holowear and just like Espeon, it will also be unlockable for a limited time for free. Players can earn 2,000 mission points for Delphox starting June 9 to get the limited-time License after which the Pokemon will be available for purchase in the in-game shop for Aeos Coins and Gems.