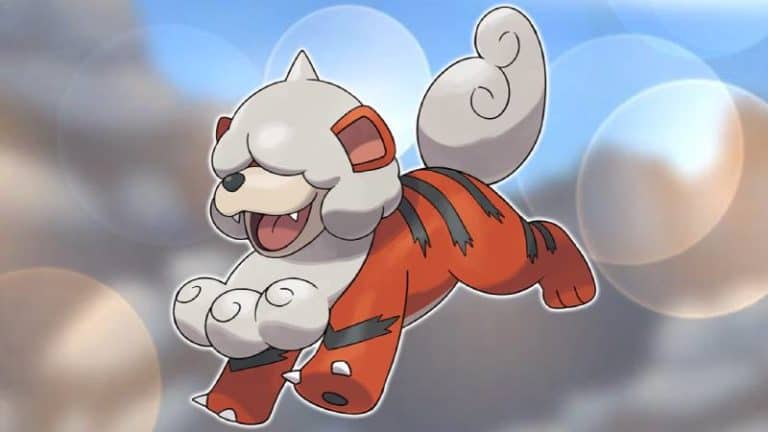 UPDATE: February 25, 2022 — The Hisuian Growlithe Gamestop giveaway launches today. Head on over to your nearest Gamestop store in the US and pick up your free download codes at the counter. If you’re not lucky enough to be located in America, the Hisuian Growlithe event has been announced for the UK, Germany and The Netherlands soon.

Fans of Pokémon Legends Arceus have spotted some new signage springing up at various Gamestop locations, promoting an upcoming Hisui-themed event. While Gamestop have not made an official announcement as yet, it look as though the huge gaming retailer will be giving players two in-game gifts during the event.

According to eagle-eyed shoppers, the marketing campaign has started appearing at tills and in windows in Gamestop branches across the US, and the distribution will – sadly – be available to American players only. According to the promotional material, gamers will be able to claim a redemption code at the counter at participating Gamestop locations, with no purchase necessary in order to get one.

The promotion will allow players who claim a code to redeem it in-game for a Hisuian Growlithe as well as 20 Feather Balls, useful for adding to that Pokédex as you roam the regions of Hisui.

What is Hisuian Growlithe?

Hisuian Growlithe is the fan-favorite Pokémon Legends: Arceus Pokémon, which is a regional variant of the original Growlithe – already a popular Pokémon in its own right. Hisuian Growlithe, unlike its Gen 1 counterpart, is a Rock-type as well as a Fire-type and has its own adorably distinct appearance to distinguish it from the slightly less fluffy-maned Growlithe we already know.

When is the Gamestop Hisuian Growlithe giveaway?

According to the posters, the event will apparently take place between February 25th and March 13th, 2022, so you’ll have a couple of weeks to be able to get into your nearest branch.