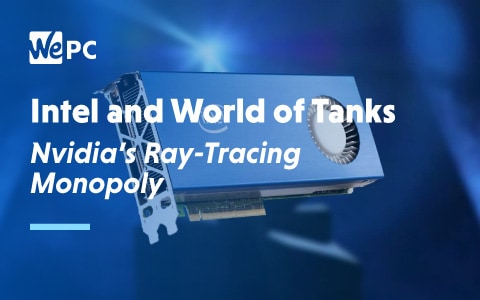 World of Tanks has been around for a while now. Initially released in 2010, the game has steadily increased its player count and continued to add content and support for new GPU technologies along the way – one of the most talked-about recently is ray tracing.

Ray tracing is one of the newest technologies that until now, Nvidia has had a monopoly over with their RTX range of cards. Ray tracing is a way of realistically rendering light, rays, and shadows in real-time. This allows for games to harness some pretty impressive lighting and life-like effects.

What cards can we use it on?

Until now, this technology has only been available on the RTX cards. With Intel now throwing their hat into the ring and working with developers to bring ray tracing to their games, this allows for more competition. This is exciting news for developers such as Wargaming who can integrate this feature into their games to help appeal to a wider audience.

Hopefully, with more people being able to experience the technology, more gains in development will be made. Intel bringing a dose of healthy competition to the table can only improve future development.

Wargame has gone on to give some extra information on how this technology will be used in their game stating:

“With the introduction of our Ray Tracing (RT) technology—developed at Wargaming with close collaboration with Intel—we can recreate the ‘main actors’ of our game in higher quality; their smallest details will give super-realistic shadows when the sun hits them. Ray Tracing further immerses you in an atmosphere of furious tank combat and provides an even more enjoyable gameplay experience.”

This all sounds great so far and is sure to make for a much more beautiful and immersive experience. There are some limitations to this however, so far the support is limited in its use and Wargame has stated that this technique will only be used for “intact vehicles that are in direct sunlight”. This is a major limitation in a game where your vehicle will be damaged in a matter of minutes, but it is still a worthy inclusion nonetheless.

It’s great hearing that Intel is allowing developers to include this technology into their games and as time goes on, hopefully, the limitations will become fewer. It does show that developers are taking note of other ways it can introduce these effects into their game without players being locked to a certain type of GPU, which is always great news.