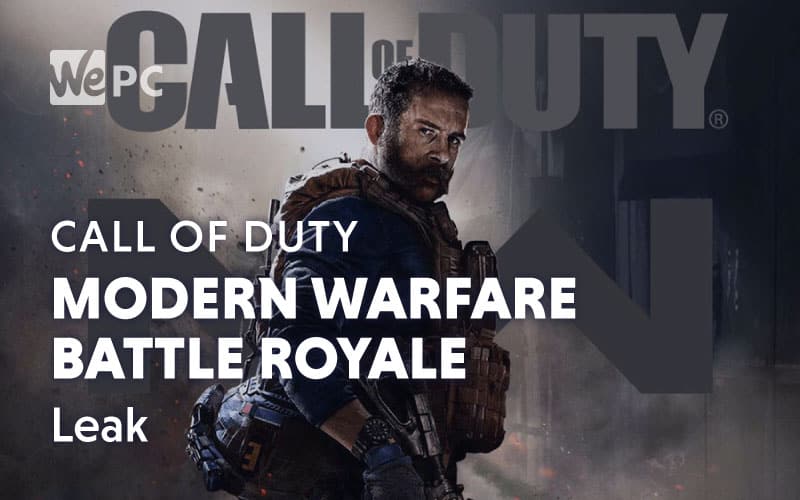 We now have an official confirmation date for the upcoming battle royale mode in Call of Duty: Modern Warfare, launching March 10th at 10am CST (3PM GMT). We also have confirmed details on the game mode released but the latest leak gives us the biggest drop of information so far.

This footage was leaked on the YouTuber, Chaos’ account and may have just been released ahead of an agreed embargo time. Although this video has now been removed, the official Call of Duty Twitter account has officially announced the game mode, coupled with a launch trailer.

Free to play for everyone.
Drop in tomorrow March 10th. #FreeCallofDuty pic.twitter.com/URU1Yg4wjk

We know that a number of high-profile YouTubers have already had their hands on this new mode and it’s likely a lot of footage they have captured will be used in the upcoming reveal. In the video posted by Chaos, he goes on to mention that this mode will be a 150-player battle royale with plans to expand the player count to up to 200 players post-launch.

In an effort to take other battle royale games like Fortnite down a peg, Call of Duty Warzone will in fact be free to play, meaning you do not have to own Call of Duty Modern Warfare to take part. However, if you do own the full game, you will be able to use skins and characters that you have previously acquired and purchased in the new Warzone game mode.

You’ll be able to queue either as part of a team of three, two or even drop-in solo to see how long you will last. There has been no mention of four-man squads but there will likely be a further update implementing this. With this being an extension of Modern Warfare itself, there will be a number of Call of Duty elements incorporated into this mode, of course, you will be able to call in killstreak rewards but these will have to be bought from stations around the map rather than earned from kills.

Helping with the fast-paced action is the use of vehicles, you’ll be able to jump in vehicles including an ATV, SUV, Cargo truck and even a helicopter to give you an advantage over other players – be warned though, this will likely make you the biggest target on the map!

As seen from the gameplay video, it appears players will drop into potentially, the largest battle royale map to date. It seems to consist of some newly developed areas alongside some old favorites such as Scrapyard, Terminal, and Overgrown, providing those long term fans with a little nostalgia. Equipped with only a pistol, you’ll explore these areas, looting weapons as you go as well as keeping an eye on your surroundings and the HUD for hostiles.

Unlike Blackout, Call of Duty’s previous attempt at the battle royale game mode, once you kill another player, their loot will simply drop on the ground in a Fortnite-like fashion, which should help keep things fast-paced and frantic rather than sifting through bags of items.  Another change to the looting aspect is the removal of attachments, thus allowing you to pick up a gun and get going instantly. You can, however, acquire guns with attachments but these come in the form of airdrops.

There will be a return of armor plates from Blackout with a slight twist. You will be able to pick up a maximum of five plates and the ability to equip three to reduce some of that incoming damage.

Another departure from the aforementioned Blackout mode is an introduction to a brand new respawn mechanic. When running with a squad, if you accumulate around $4500 in cash and fail to revive your comrades, you should be able to buy a respawn token, bringing your deceased teammates back to life. Additionally, maybe in an attempt to differentiate itself to similar games, a second chance, fight for your life minigame will also be introduced in which you’re transported to a Russian Gulag, fighting another fallen enemy in a 1v1 scenario for the chance to get back into the core game. Other players will also be able to look on and even get involved by throwing projectiles to stun the soldiers taking part.

This should give you a general idea of some of the features you’ll be able to expect on release. There are lots of other in-depth details to be found in the video such as loadout drops, contracts, bounties and even the amount of ammo you spawn with, but we’ve tried not to spoil too much here.

With the release of this leak and an advert popping up on Twitch, it was looking likely that we’d see this free to play battle royale mode drop very soon. We are in fact getting Warzone on March 10th at 10 AM CST (3 PM GMT) if you already own a copy of Modern Warfare, and a few hours after that for everyone else

The release times for those who own Call of Duty: Modern Warfare are:

Warzone will be available for everyone to download and play from:

Call of Duty Warzone will be available free-to-play on both consoles and PC when it releases and as shown above, the official trailer has been revealed by Activision. If you’re still looking for information on this new mode, be sure to keep an eye out for more updates here at WePC as well as following Activision’s official social media accounts for the release.