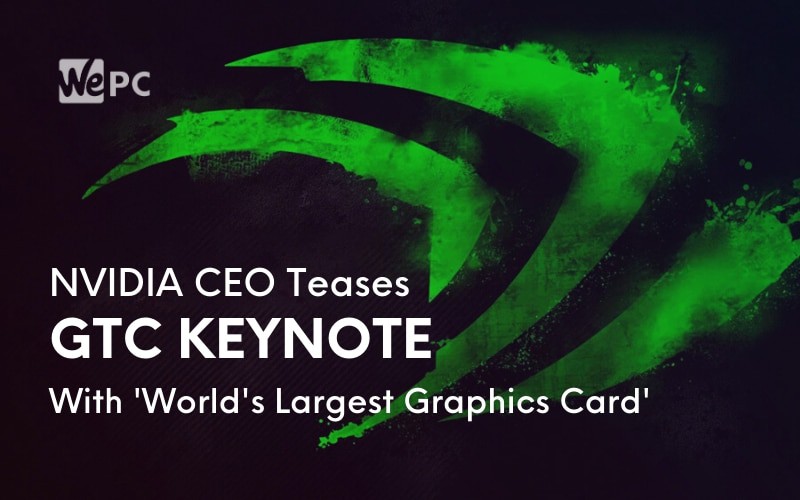 Ahead of NVIDIA’s GTC event keynote address tomorrow, the GPU giant’s CEO Jensen Huang has produced a rather comedic tease hyping up the event.

While speculation about what exactly NVIDIA has up its sleeve has fueled the rumor mill for months now with mounting expectation that the company will unveil the next-gen GeForce range, Huang offered a wholly surprising alternative – the world’s largest graphics card.

In a YouTube uploaded to NVIDIA’s official channel, the CEO is seen donning some oven gloves amid the luxury of a kitchen most of us can only dream of owning, then heading to an oven close-by.

After opening the doors, Huang is seen extracting a massive board with what appear to be giant GPUs attached to it. The weight of the board sees Huang grunt as he lifts it onto the counter before saying ‘okay ladies and gentlemen, what we’ve got here is the world’s largest graphics card.’

And seeing the heft of what Huang’s been cooking, it’s hard to disagree and we can only imagine what graphical power this beast could produce if it is indeed genuine and functional.

While this is undoubtedly a bit of tongue in cheek jest ahead of tomorrow, it may suggest that NVIDIA is planning to divulge some pretty seismic news.

If rumors and rather overt hints by NVIDIA are anything to go by, we should get our first look at the next-gen 7nm Ampere GPUs, and more specifically, the GeForce RTX 3080 and GeForce RTX 3070. Early indications are that the GPUs will offer a 75% performance boost compared to existing GeForce RTX 2000-series models.

Taking into account Huang’s tease, NVIDIA may be preparing to brandish a tag line along the lines of ‘the world’s most powerful graphics card’ or something similar.

As for confirmation, we don’t have long to wait at all. NVIDIA’s pre-recorded GTC keynote, initially scheduled for late March before it was moved back due to the ongoing global pandemic, airs tomorrow, May 14, at 6 am PT. Marketing for the event points to NVIDIA shedding light on the latest innovations in multiple sectors, including high-performance computing, AI, and graphics.