After some insider tips and overt hints from the developer itself, Ubisoft has lifted the curtain on its brand new free-to-play battle royale shooter, Hyper Scape.

Self-stylized as 'urban futuristic free-to-play Battle Royale,' Hyper Scape drops players on the streets of Neo Arcadia for a 100-player fight to the death known as Crownrush either solo or in squads.

It's a pretty familiar formula and one that most closely resembles Respawn's Apex Legends, but with verticality and mobility ramped up to eleven. All of the buildings making up Hyper Scape's map are scalable, aided by a loose interpretation of gravity's effects, high-powered jumps, and abilities that propel players into the skies.

Here's the official description to get a sense of the world underpinning Hyper Scape:

''It's 2054, and technology is everywhere. It helps people survive the day-to-day grind - from neural networks to cybernetic augmentations to burgeoning AIs - but for the bottom 90%, living is tough. Many work for megacorporations to survive - these are the lucky ones. There is only one way to rise to the top...one way to change your lot in life and achieve something better: win the Crown in an intense Battle Royale in the virtual world of Hyper Scape.''

In another twist, Hyper Scape features lootable hacks or abilities. These range from invisibility and proximity mines, to armor and a massive bouncing ball through to teleportation, a heal, a slam, and a defensive wall. There's also an interesting death mechanic that allows remaining squadmates to revive a downed teammate, but that teammate can still roam the map as a ghost of sorts while awaiting a revive.

While winning a match of Hyper Scape is possible by downing all opposing players, victory is also attained by capturing a Crown that spawns towards each game's tail end. Keep it long enough, and you'll come out on top.

Much like other battle royale games, Hyper Scape features a circle that slowly diminishes in size, except its called the Decay, a kind of digital corruption that dissolves entire districts of Neo Arcadia as the game progresses. Much like the gas in Warzone, the Decay inflicts damage should the player linger in it for too long.

Ubisoft has also made a big song and dance about Hyper Scape's 'cutting-edge' Crowncast Twitch extension, and the fact the game is 'built from the ground up as an interactive streaming spectacle.' It allows viewers to vote on game-changing effects that alter the game in real-time and will allow streamers and viewers to interact 'like never before.' 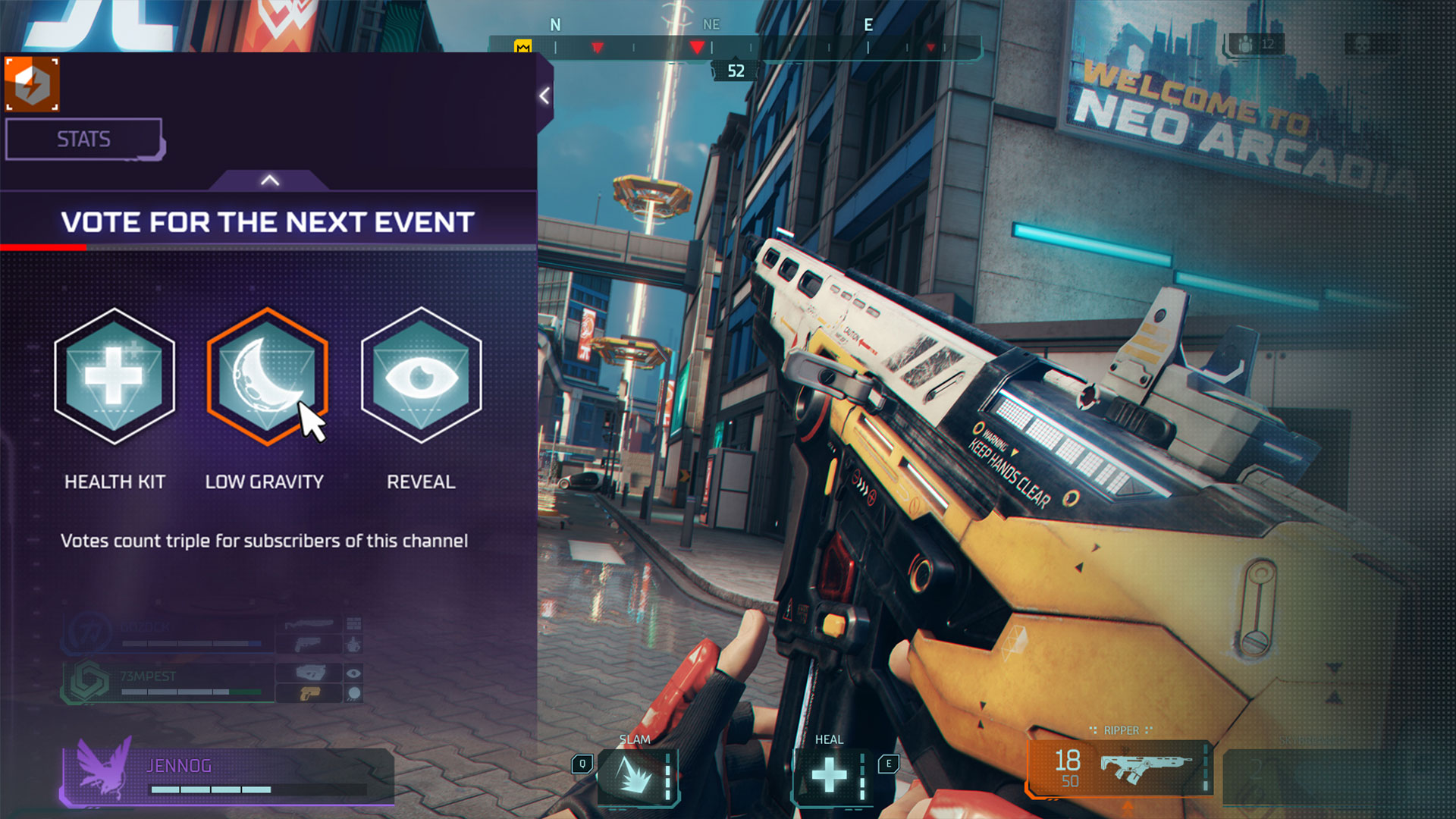 Before we all get too excited to try out the latest contender to join the battle royale fray, Hyper Scape is only playable as a Technical Test, a closed beta of sorts which runs until July 8th at 8 CET, ahead of a full launch later this year.

Much like Valorant, Ubisoft is dishing out access to the Technical Test through drops on the Twitch streaming platform. The drops are obtained by watching one of the 50 or so participating streamers. There are no guarantees as Ubisoft warns, and watching eligible streams only gives a chance to get access.

Not all regions are eligible either. Ubisoft has limited eligibility to North America and European countries. These include Austria, Belgium, Canada, Denmark, France, Germany, Ireland, Italy, Netherlands, Norway, Portugal, Spain, Sweden, Switzerland, United Kingdom, and the USA. Ubisoft says it will expand its data center network ahead of launch to welcome players from across the globe.