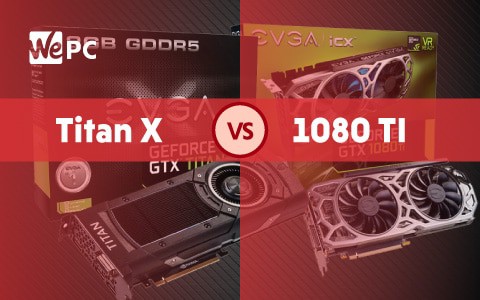 Nvidia has always been in pole position when it comes to providing the highest quality graphics cards money can buy. Today, we decide to compare two of the best performing GPUs in Nvidia's impressive lineup, the Titan X and the GTX 1080 Ti.

With the super 20 series set to release in a couple of weeks, we thought it was well worth comparing some of Nvidia's current flagship GPUs. Don't worry; we'll also look at how the new super card compares to the Titan and 1080 Ti as well.

For those that aren't up-to-speed with the Titan X, it's a Pascal graphics card for enthusiasts which was launched back in August 2016. It's built on the 16nm process and based upon the GP102 graphics processor. The card supports DirectX 12.0, amongst other technology, and comes with an impressive 12GB of GDDR5X memory. So in short, extremely powerful.

The Titan X is a dual-slot card, as many modern-day GPUs are, and is 10.5 inches long. It has a base clock speed of 1417Mhz and a boost clock of 1531Mhz respectively.

The Titan X is up there with the quickest and most powerful GPUs currently available in today's market. Below we have outlined the full specifications of the Titan X. 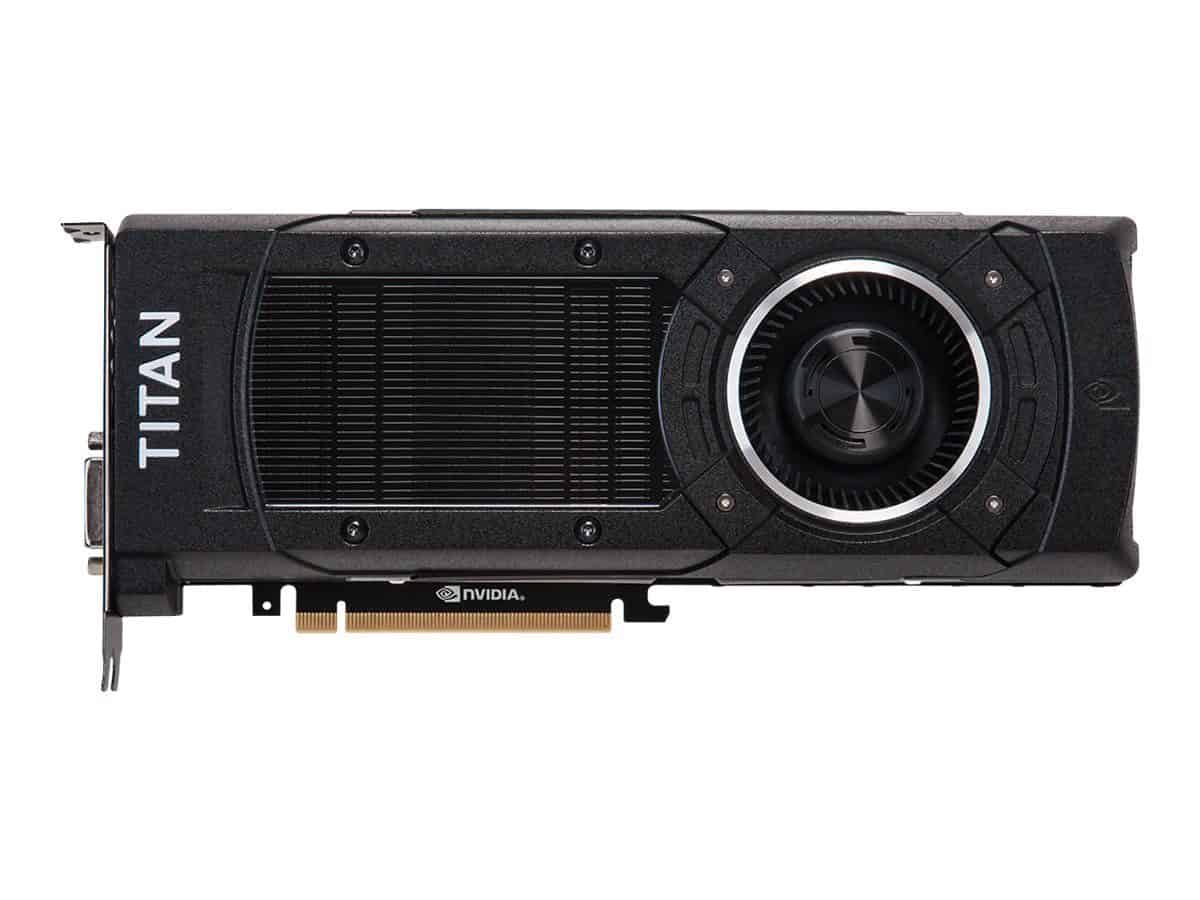 Verdict: Hugely impressive card that shines with power and performance. If you're looking for one of the best graphics cards money can buy, the Titan X should be high on your list of recommendations. Be aware though, these things don't come cheap.

The TDP for the Titan sits at 250W, and you guessed it, totally equivalent to the GTX 1080 Ti again.

I think we can straightaway say that this card is going to absolutely smash your AAA game titles clean out of the water. The Titan X is capable of handling anything you throw at it and all in stunning 4k resolution. It's one of the only cards which can deliver consistent 60 frames per second in most of the leading engines at ultra HD 4k.

At 4k it's safe to say that the Titan X is one of the best performing GPUs out there. It's 20%+ faster than any custom GTX 1080 meaning it's hugely more impressive than the majority of other cards available.

The picture underneath shows benchmarking results taken from Techpowerup, where it clearly shows the Titan X finishing 5th in an overall performance summary against some of the other market leaders. 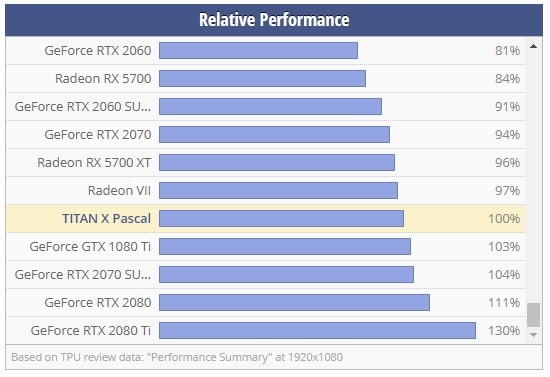 Unfortunately for the Titan X, it gets narrowly beaten by the 1080 Ti, a trend we will see continue as the article goes on. The 1080 Ti comes in with an average of 3% better performance, not huge, but still a victory.

Underneath is more benchmarking that shows the Titan X's 3DMark Fire Strike Graphics Score compared with some of the other leading cards available.

As you can see, once again the Titan X is marginally beaten by the 1080 Ti by just over 400 points. That being said, the RTX 2080 Ti (the "big daddy" as I like to call it), beats the Titan's score quite considerably.

Pure benchmarking figures aside, I'd like to touch on temperatures for a moment. It's quite apparent that the Titan X has a blower-style fan. For those unaware, this means that instead of pushing the hot air around your build, like aftermarket cards usually do, a blower-style fan will suck the air into the card and blow it out the back. This, in turn, results in an overall cooler build.

The fan itself will reach upwards of 50% in stressful situations where the fan will be turning at 2,500RPM and be creating noticeable noise. Nothing too off-putting though it must be said.

So, the big question a lot of people are currently asking is, how does this Titan stand up to the mighty GTX 1080 Ti? Well, we'll do our best to try and break it down for you. 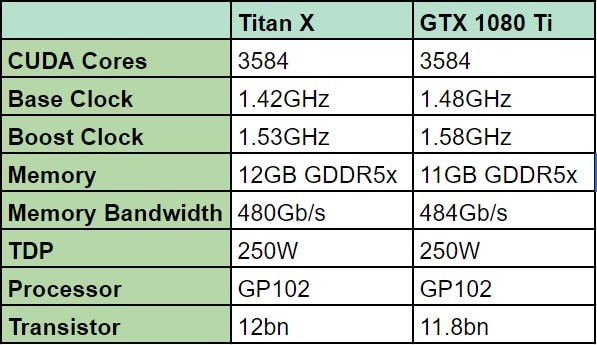 The Titan and the 1080Ti are pretty close right across the board. Same CUDA cores, pretty similar clock speeds (1080Ti just edging it), almost identical memory bandwidth, same TDP, processor, and transistors. One noticeable difference is the memory, whereas the GTX 1080Ti has 11GB, the Titan has 12GB. But how much difference does that make? 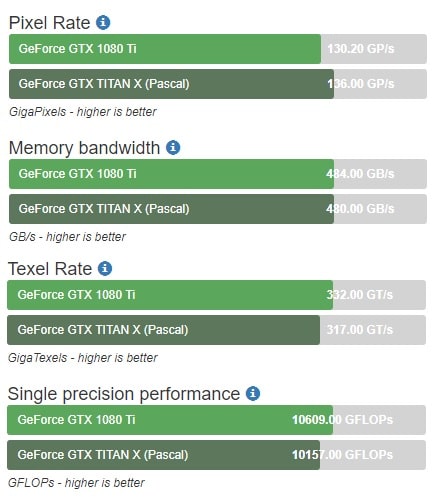 The benchmarks between both these cards are pretty close, and to be honest, that's because they're very close in terms of specifications. The same can be said for in-game FPS across a number of different games. Both cards break the 50 frames per second barrier in 4k ultra and in a lot of games, will break 70. The difference between the two cards, however, is very low with the most significant difference being 3-5FPS.

So what conclusion can we take from the data collected? Well, it's safe to say that choosing between the Titan X and the 1080Ti is a difficult choice to make; especially if you're looking for the absolute best of the best in graphical performance. Both Titan and 1080Ti are very closely matched in almost every aspect, this being said, however, the 1080Ti probably just edges it in the benchmarks though.

Ultimately, both cards performance to the highest level. However, due to the massive demand and popularity of the 1080Ti, I feel the Titan might lose the battle in the long run.

Which one did you decide to go for? Let us know in the comments section below!