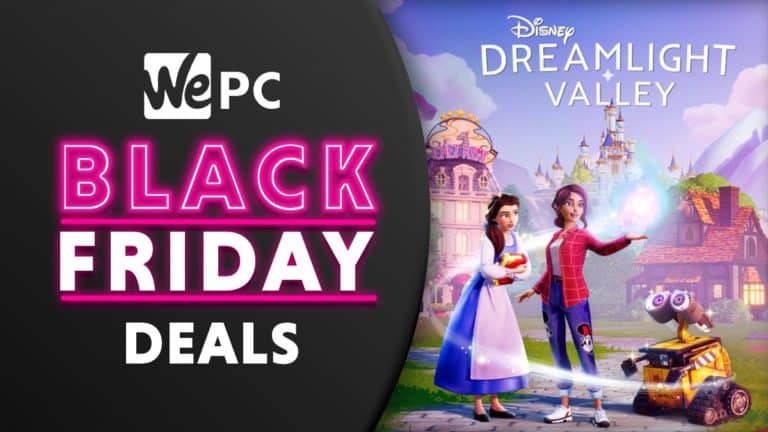 Disney Dreamlight Valley will be a major player during the Black Friday 2022 sale.

The game is a TPP life simulator with beloved Disney and Pixar characters.

Ever wanted to be a friends with Goofy? Well, now you can!

Check out Disney Dreamlight Valley and many more games during this year’s Black Friday!

Disney Dreamlight Valley is a very new game. It became available in early access just a few weeks ago and is scheduled for a full release next year in 2023.

The game is available on PC, PS4, PS5, Xbox One X/S, Xbox Series X/S, and Nintendo Switch. However, if you want to buy some other games than Disney Dreamlight Valley here are just a few stunning gaming deals.

Do not be fooled by Disney Dreamlight Valley’s cartoon graphics. The visual presentation might be simple, but it is still very pretty. Some players might want to get an upgrade for their PCs.

Your gaming setup is also important to us, so we’ve prepared a list of some of the best gaming PC deals and discounts available for Black Friday 2022.

Disney Dreamlight Valley is available on all of the major platforms. It means that if you want to buy the game on a PC you’ll need to do this via Steam. For all the PlayStation players we have a PS Store with the Black Friday sales.

Xbox players will use Microsoft Store, and Nintendo Switch has its own Nintendo Store app available via the Nintendo Switch console. To add to that, we also have a list of some of the best places to look for amazing gaming deals.

Disney Dreamlight Valley is an awesome third-person game based around just living with your friends, meeting new people, and taking care of stuff, but these friends are familiar faces from Disney and Pixar.

It is a game similar to The Sims, Stardew Valley, and such. The game is a lot of fun already, with even more well-known characters on the horizon. Complete quests and build relationships with childhood heroes. A game that is worthy not only for younger gamers but for any Disney fan.

Disney Dreamlight Valley will be a part of Black Friday when it starts on November 25, 2022.

In addition to that, many companies organize Black Week, surrounding Black Friday, or even Black Month which lasts for the whole of November. Make sure to check your local retail stores, and get a head start on the sales, when they go live.

However, if you’d like to visit some more fictional worlds other than Disney’s there are plenty of games to choose from. See these latest deals for even more discounts. Deals on top of deals.

If you haven’t got enough deals already, here are some more! Only the best games and gaming genres available in 2022. Check out our pages full of great deals and discounts below.

Here are some FAQs pertaining to Disney Dreamlight Valley

Will Disney Dreamlight Valley Have a Black Friday Sale?

Yes. Disney has one of the biggest fictional worlds, so make sure to check out Black Friday Deals for Disney Dreamlight Valley when the sale comes.

Yeah. The game is still in early access, but it is very polished and has a lot of content already.