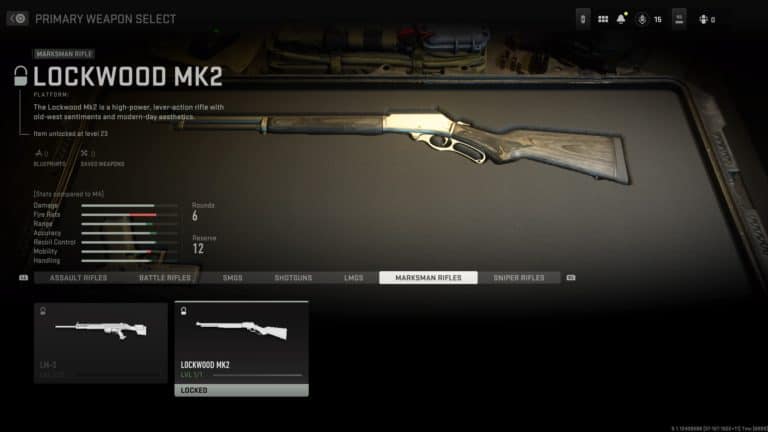 For those who want a challenge or just have a thing for cowboy guns, you will want to check out this Modern Warfare 2 Best Lockwood MK2 Build.

This lever-action rifle deals serious damage but is only used by the most skilled marksmen. You’ve got maybe two shots before an enemy turns his gun on you, and after that, you’re dead.

As we mentioned, this gun is not for your typical player. Packing a rifle from a century ago makes about as much sense as using watermelon to carve a steak, especially when everyone around you has fully automatic weapons. However, some folks born with eagle eyes will no doubt want to try it.

Given this is technically a marksman rifle, we recommend you stay far away from your opponents. Your only chance of survival if they spot you is to be too far away for them to be effective. The recoil pattern on most weapons can’t reach past 40 meters.

You’ve got one to two shots before you’re spotted, so make them count, and have one be a headshot if possible. Unfortunately, a body shot won’t knock an enemy out, so if you miss that follow-up shot, be ready to meet your maker.

During the Call of Duty Modern Warfare 2 online beta, you were not allowed to equip attachments, so, unfortunately, until the entire game is out, we can’t advise you on what you should be using as far as scopes, grips, stocks, etc.

We can, however, give you some general advice. And be sure to check out our other guides as well.

If you’re looking for more help with various weapons, you can find tons of advice in our other weapon guides for Modern Warfare 2. They should help you to get the edge on your opponents in most of your matches:

Is the Lockwood MK2 a good gun in Modern Warfare?

While it is powerful, it’s extremely low rate of fire make it a good choice only for the dedicated marksman.

Is the Lockwood MK2 a real gun?

Yes, it’s based off of the iconic “Henry Rifle” invented by American Benjamin Tyler Henry in 1821.