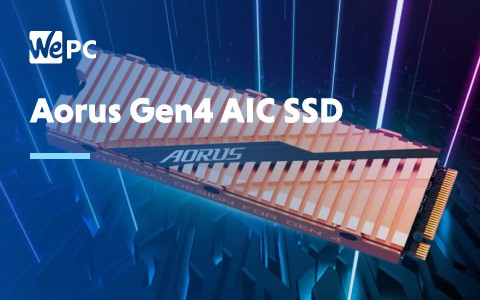 Gigabyte has provided fresh new details about its upcoming Aorus Gen4 add-in-card SSD storage drive solution that was first unveiled back at Computex earlier this year.

Using the PCI Express form factor, the Aorus Gen4 AIC makes full use of the latest PCIe 4.0 tech to offer speeds up to three times faster than the best standard Gen4 solid-state drives, which usually reach sequential write speeds of up to 5,000 MB/s, and write speeds up to 4,400 MB/s.

The new storage drive features no less than four high-speed NVMe 2 TB SSDs for a total capacity of 8 GB, which boasts a sequential read and write speed of up to 15,000 MB per second thanks to a RAID 0 array configuration.

As always, we have to take these readings with a pinch of salt as they are the fruit of contained internal tests that may not translate to real-world builds where configurations vary on the consumer end.

With great power comes great heat, and Aorus has designed a new advanced thermal solution exclusively made for the AIC with both smart active and passive cooling.

There’s a high thermal conductivity pad, a 5.5mm pure copper heatsink, a two ball bearing reactive blower fan, and armor with a conducted air-flow design. The heatsink is in contact with the hottest controller on the SSD and whips away the heat to the copper sink. The fan then draws heat away.

Aorus has also put in eight temperature sensors and a fan profile system so users can monitor temperatures and define behavior based on their build and workload requirements.

Aorus says the setup reduces working temperatures by 30% thanks to the all-encompassing armor, preventing thermal throttling and data loss while boosting overall stability. The results are better performance and reliability over more extended periods.

The speeds offered by the Aorus Gen4 AIC SSD are overkill for gaming but are ideal for memory-hungry workstation application like photo and video editing.

Aorus has yet to confirm a price point nor has it shared a release window.