Here are the FIFA 22 TOTY winners! 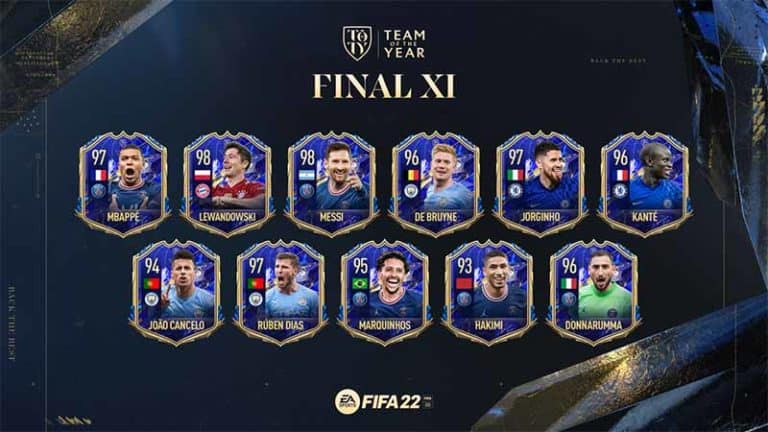 EA Sports has announced the winners of this year’s FIFA 22 Team of the Year voting competition. The final 11 of the 80+ possible entries were determined by fans of the FIFA 22 FUT game, and so, these stars have now are now commemorated in the game. Below you will find the winners of the FIFA 22 TOTY, along with other details about their ascension in this year’s 11 best players.

Out of the 80 players that were eligible to receive votes during the week-long voting process, the following 11 made it as the FIFA 22 TOTY winners. The list of players features the likes of Lewandowski,  Messi, De Bruyne, Mbappe, Kante, and more. Amongst this list is players that have had a cracking year, along with those who are extremely popular. One of those that fit the bill includes Mbappe, whose recent Headliners promo shows how much of a king he deserve to be through this season’s performance.

In addition, Rio Ferdinand recently gave the top 11 who he thinks deserves this season‘s award on his youtube podcast. Rio Ferdinand picked out players like Cancelo, Kante, Dias, Lewandowski, who made it on the list. At least Ferdinand shares at least half of the popular vote if you care about his opinion, but the rest of his dream lineup was fairly solid picks regardless of the outcome of the popular vote.

“EA SPORTS FIFA Team of The Year is the authentic voice of millions of football fans, as they assess the world’s greatest players and vote for those they believe had the biggest impact on the beautiful game in 2021,” said David Jackson, VP of brand for EA SPORTS FIFA. “Year after year, we’re energized by the engagement of our global football community, and we’re honoured to showcase their chosen XI in FIFA 22.”

Also, for some reason, David Beckham presented this year’s announcement of the FIFA 22 TOTY. We linked the Twitter embed above if you want to see the full scale of marketing EA Sports went on for this year’s celebrations. For a full view of who the top 11 are, see the featured image of this article.