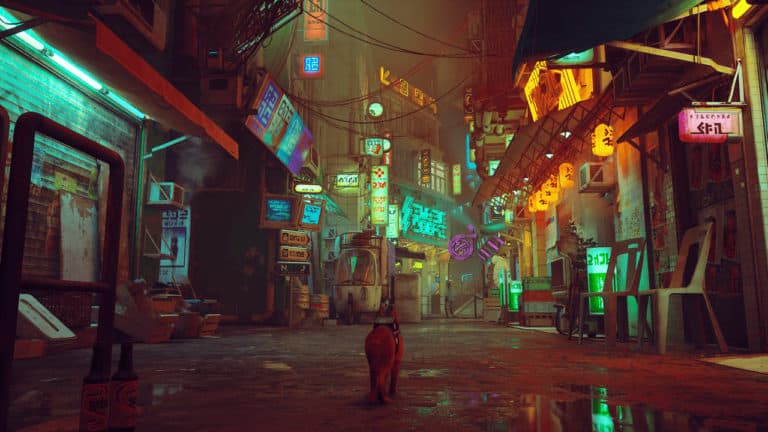 Tracking down all of the Stray memories can prove a challenge.

Developer BlueTwelve has done well to conceal and bury them in unlikely places across Stray’s different chapters with some located well off the beaten path.

Here you’ll find a complete list of all 27 Stray memories and their locations.

Stray is having a bit of a moment. It’s received rave reviews not just from critics, but also among players, overtaking God of War as 2022’s highest-rated Steam game. No small feat for what is a AA game about a cat.

After joining forces with B12, exiting the Flat, and a short ride on a bucket zip wire, you’ll come across a large mural depicting a beach scene. Walk towards it to trigger the memory.

Head to the Slums’ main stairway where you first interact with the red cloaked robot. Find the red vending machine and climb up to the top of the building above it. Located behind a large sign with a pointing arrow, you’ll find a dead robot next to several stacked suitcases. The memory is there.

The merchant will sell you a mysterious item hidden behind a piece of cloth. It’s a memory. You’ll need three energy drinks to buy it, which you can obtain from vending machines throughout the Slums.

Head to the bar in the Slums, located just down from the main stairway. Go to the second floor and on the left you’ll see a small table with glasses hanging above it. The memory is located in a bowl of soup with what appears to be sticks of RAM.

Head up to Momo’s flat. Go to the small bedroom located at the back and look at the posters on the left wall. There you’ll find the memory on a ‘Back Home 2’ poster.

Head down the main stairway in the slums and head right, then immediately left. Keep running straight down the alley, up a flight of stairs, and you’ll find a white vending machine. The memory located next to it on a wall marked with ‘RIP Humans.’

Head down the alleyway to the left of Morusque the robot musician. Climb up to the small ledge above the stack of large wall-mounted air con units. The memory is next to a mural of a robot.

Memory 7 is on the second floor of Elliot’s flat, which is located just before Grandma Clothing. Note the door with the schematics taped to it. Scratch on the door to be let in. You’ll find the memory on the left next to a plant at the top of the stairs.

This one is hard to miss. Make your way across the Rooftops until you come across a large, fallen sign flashing on and off. The memory is located in front of it.

Make your way through the building site area until you come across a gate you can hack to avoid the Zurks. Towards the back of the area, past the hackable gate, is a Neco Corporation sign. The memory is there.

Another unmissable story memory. This one unlocks after installing the receiver.

Seamus lets you through a set of two doors as you traverse the Dead End chapter. Past the second where he refuses to go any further, head straight then take a left as soon as you can. You’ll find the memory against a metallic garage-style door.

After the short action section where you’re chased by Zurks and our stray gets momentarily injured, head up from the broken down truck until you come to a ledge. Once there, don’t turn left as the game wants you to, but instead continue straight through a fence to find the memory next to a fallen robot.

On the bottom floor of Doc’s hideout, there’s a mannequin sporting a bucket with a smiley face on it. The memory is located just there.

After the boat ride, Momo holds open a large door for you. Head through and continue straight down the corridor. Take the first left, blast away the Zurks, and note the large sewer pipe with an opening at the bottom. Head through to find the memory.

Make you way through the Sewers and get through the first action sequence where hordes of Zurks chase you down. The sequence ends when you jump down onto a pipe. Head left on this pipe then jump your away forward until you find a large opening on the right.

Go through to find a circular pit with large blinking red eyes. Find the memory on the edge.

This one unlocks automatically as you cross the bridge leading to the Antvillage.

On the first floor of the Antvillage, find the robot sitting on a sofa watching TV. The memory is located next to a wall scribbled with large white letters to the right of the sofa.

This is an unmissable story memory that unlocks when you first get to Midtown and enter the subway.

From the subway, head up the large flight of stairs, turn right, and into the small gated den. The memory is located next to a seated robot and a shelf full of books.

Head to the alleyway behind the nightclub. Near the sweeping robot, climb on to the trash bin and head left up to a ledge to find the memory next to a pile pillows, a TV screen, and a blue neon sign.

Between the main Midtown square with the holographic robot and the Residence, find the barber’s shop on the right hand side of the street. Head inside, jump to the sofa then up to the small mezzanine above to find the memory.

From the main Midtown square, turn towards the Residence, and head into the small restaurant on the left. Jump onto the counter, then the shelf just behind it, and look up to find a hidden ceiling area. Jump up to find the memory.

This one is only available after stealing the Atomic Battery from the Neco Corporation facility area. Once back on the streets of Midtown, head to the central square to find the sentinel station door open. Inside is the memory.

You can only find this memory during the night club portion of the Midtown chapter. Head inside through the window in the back alley behind the club. Jump behind the bar, up on to the counter, then walk to what looks like a dumbwaiter. You’ll drop down to a lower level where you’ll find the memory on a small table in the center of the room.

The Jail chapter has a single memory to find. It’s located in the courtyard with the patrolling drones. You’ll find it next to a past-its-best robot propped up against a large green garbage bin.

You’ll unlock this memory automatically when you enter the Control Room for the first time.

If you need a little more help during your playthrough, check out our other Stray guides: