Slay this volcanic dragon with our Elden Ring boss guide 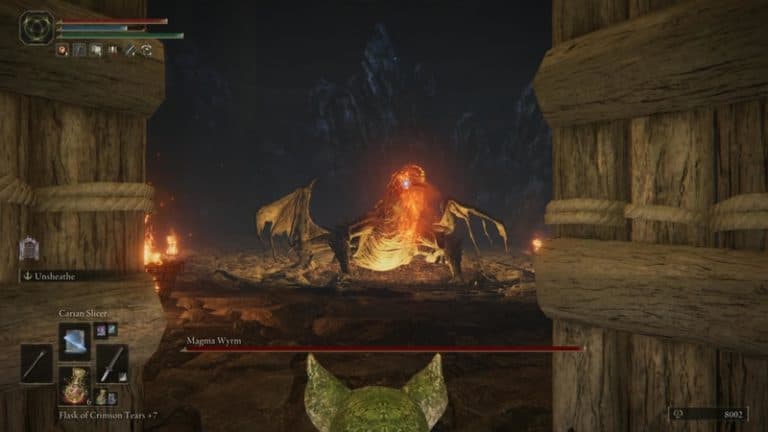 The Magma Wyrm is a boss that can be fought once the player reaches the Caelid region in Elden Ring. The Wyrm will drop an extremely powerful weapon once killed, making the rest of Caelid that much easier to deal with. We’ll walk you through how to defeat this boss right here in our Elden Ring guide.

Elden Ring: How to find the Magma Wyrm

The Magma Wyrm is the boss of the Gael Tunnel in Elden Ring. This is one of the earliest and least punishing dungeons in the Caelid region. In order to find the Gael Tunnel, follow the road down past the Shack of the Rotting. Then once on lower ground, ride back to the Limgrave/Caelid border. The Gael Tunnel is located just past the Forsaken Ruins. Once inside, make your way through the cave, and eventually, you will come upon the Magma Wyrm.

How to defeat the Magma Wyrm

While the Magma Wyrm may look like a sedate creature, it can move faster than you may be expecting. Keep your distance when possible, but be ready for its sword swings that can cover most of the area.

Watch out for the lava trails that the Wyrm spits, as they can turn an already cramped encounter area into somewhere truly deadly.

The Magma Wyrm is somewhat vulnerable to being staggered. Its head is very low to the ground and easy to hit, a rarity in Elden Ring. Aim for the head in order to buy a few seconds of the Wyrm staying still, giving you the chance to get some damage in unimpeded.

When Defeated, the Magma Wyrm will drop a Dragon Heart, which can be used at the Cathedral of Dragon Communion. You will also receive the Moonveil. This is a powerful katana that scales exceptionally well with INT, and boasts a powerful inherent skill.