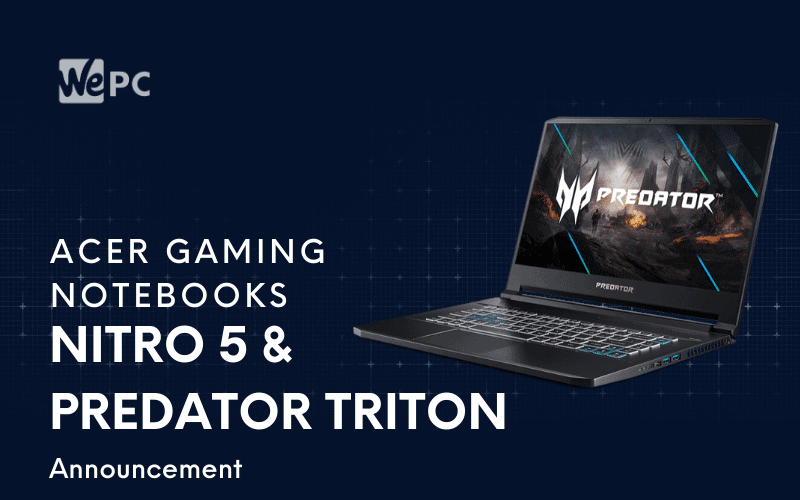 If you thought that there couldn’t be any more gaming laptop news this week, you would be dead wrong, as today Acer have announced the brand new Nitro 5 gaming notebook and the Triton 500 gaming notebook.

Both of these new gaming laptops are going to be powered by the latest in Intel’s 10th generation Intel core processors, alongside the latest in Nvidia’s GPUs and refresh rates that would make any respectable PC gamer interested in gaming on the go.

The Predator Triton 500 is Acer’s message to the world that a gaming notebook can be powerful while not bulky. Kitted out with up to an Nvidia GeForce RTX 2080 Super (or 2070 Super GPUs with a Max-Q design), Acer has tipped the Triton 500 to be “capable of taking on the toughest challenges.”

When it comes to gaming, this may well be the case as the notebook is also tipped to come with 7.5 hours of battery life from a full charge – impressive if the notebook is going to be running this powerful hardware during demanding applications such as gaming.

Of course, when we talk about the graphics of a gaming laptop or notebook we need to talk about the display, as they are drastically going to affect the type of output the graphics card can deliver – and Acer are stepping to the plate with the Predator Triton 500. The notebook is equipped with a 300Hz IPS panel, capable of delivering a 3ms response time whilst still delivering the full range of the sRGB color gamut in “smooth and vivid detail.” Impressive if true, it seems that the Predator Triton 500 won’t have any issues as far as graphics are concerned. And yes, it does support Nvidia’s G-Sync technology, meaning that screen tearing and lag should be all but eliminated.

Now, we come to connectivity. This is especially important for a gaming notebook as it’s designed specifically for gaming on the go – and once again, Acer seems to have covered their backs here.

The Predator Triton 500 is set to be equipped with a Killer Wi-Fi 6 AX1650i wireless controller, which will work in conjunction with an E3100G ethernet controller all controlled within the Control Center 2.0 software to deliver seamless gaming in online arenas with no input lag or drops in quality when reliant on network services (internet connection dependant). In fact, this notebook will be capable of prioritizing its critical applications – meaning that if you need bandwidth priority, you get it.

Looking at some of the other hardware details, it looks like the Acer Predator Triton 500 will be equipped with two terabytes of NVMe RAID 0 SSD storage, and 32gb of DDR4 memory. Combined with the Intel CPU, this would mean that this notebook will be capable of running some powerful programs on the go with no real issues stemming from a lack of CPU power.

When you consider all this power within a notebook though, one question that is going to present some tough answers is cooling. Acer seems to have planned for this though in their implementation of their Vortex Flow Technology – a new design that sees three custom fans working together to maximize airflow whilst minimizing noise.

Cooling seems to be a major priority with Acer though, so their cooling precautions don’t stop there. The Predator Triton 500 will also come with an “all-metal 4th generation AeroBlade 3D fan.” Why? Apparently, this will allow for a 45% increase in airflow within the Notebook, which when combined with the additional five heat pipes in the notebook, means that the 2020 version of the Predator Triton 500 will get 33% better thermal performance than last years model according to Acer.

All of this will be housed in a thin metal chassis, weighing just 2.1kg. All in all, this could be a very impressive gaming notebook, and it will definitely be interesting to see how the notebook performs when it is released.

Acer supposedly wants to prove that “gaming notebooks don’t need to break the bank” with the Nitro 5 gaming notebook, and they might just have cracked it with the 2020 Nitro 5.

The Nitro 5 will come with a 10th generation Intel Core i7 processor, matched with either a GeForce RTX 2060, GeForce GTX 1650Ti or 1650 GPU. Basically, it seems like the Nitro 5 will be capable of delivering a strong graphical output, without being mired by CPU throttling.

Apparently the Acer Nitro 5 will also ship with M.2 PCIe SSDs and a one terabyte hard drive for storage, as well as up to 32gb of DD4R4 RAM. Impressive if it all holds up – especially for a notebook that Acer wants to be considered a budget gaming option.

All of this internal hardware is set to be cooled by a dual-fan cooling system that uses exhaust ports and four new heat vents to deliver up to 25% better cooling performance than the 2019 model delivered by Acer’s estimations. Combined with the notebooks CoolBoost technology that allows an increase in fan speed by 10%, as well as an increase in GPU cooling by 9%.

All in all, the Nitro 5 Gaming Notebook promises to be a very adept little gaming station – and Acer wants to make sure it’s appealing to as many people as possible. That’s why then they have tipped the Acer Nitro 5 to be coming to shelves with a price tag of around $749.99 (€899). If that is the case, then gamers who are looking for an affordable way to enjoy video games on the go might just have their solution in the Nitro 5 Gaming Notebook.

What do you think about the announcement? WePC is going to be following the coverage from Acer closely, but if you have any questions for us feel free to ask us in the comments below and we will do our best to answer! Or head over to the Community Hub to discuss!