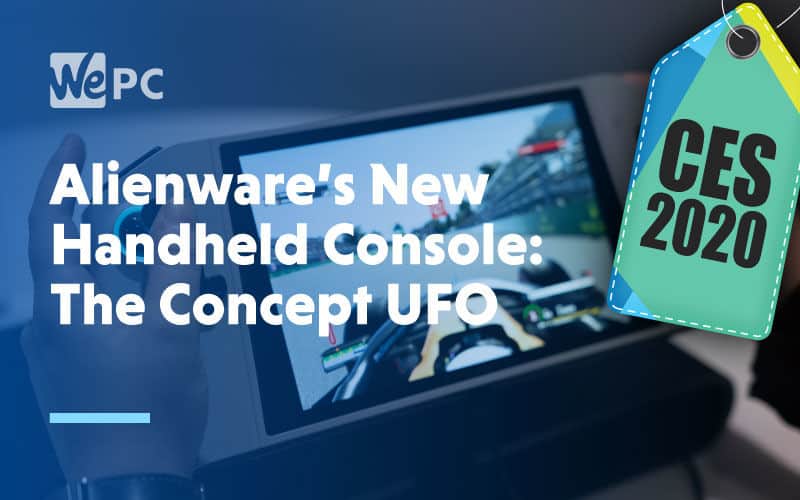 Alienware are for the most part known best for their gamer-focused desktop PCs and the insane gamer laptops that they have released in the past – but Alienware have used CES 2020 to show off their latest concept: The Concept UFO.

What Is The Concept UFO?

At its core, the Concept UFO is a handheld games console that Alienware (and Dell) want to use as a conduit to bring AAA PC titles to gamers in a ‘handheld format’. Ambitious, but they definitely have our attention.

How exactly is the Concept UFO going to achieve this though? Well, Alienware have been a little dicey on the exact details of the hardware that is going to be powering the Concept UFO, but (according to an official Dell blog post) it will feature a 1900 x 122 resolution 8-inch screen, with detachable controllers and (apparently) involve 10th generation Intel Core processors.

Looking closer at the design, its not hard to see where Alienware might have taken inspiration from, with the console very similar to the Nintendo Switch– but they aren’t alone in this ‘lateral thinking’. In fact, it’s my personal opinion that this may be the design route that mobile gaming takes en-masse from now on as it offers versatility and comfort in handheld play.

Just like the Nintendo Switch, players will be able to detach the controllers from the magnetic rail system that holds them to the main screen and hardware unit and attach them together on a hub unit to form a more traditional controller.

The screen itself will be complete with a stand so that gamers can play easily on ‘trains and airplanes’ and will be able to connect to different monitors and display screens – but here is where the comparisons with the Switch ends.

The Concept UFO is at its heart a gaming PC, handheld or not. That means it will be able to connect to mouse and keyboards for a more traditional PC gaming experience, as well as supporting its included controllers. So, theoretically and should a gamer want to, they could play on the Concept UFO during their commute home, go into their living room, connect the UFO unit to their TV or monitor and then continue gaming seamlessly with a traditional mouse and keyboard setup.

Not only that though, but the Concept UFO will also be running off a windows operating system – meaning that the games library available for the UFO is potentially limitless. Modding, graphical adjustments and an extensive library of games are just a few reasons that we are excited to see the Concept UFO in action – but that doesn’t mean the Concept UFO is certainly bound for success.

The Future Of The Concept UFO

Let’s assume that the Concept UFO goes to production, what issues might lie in its path?

One of the major concerns that have been expressed about the Concept UFO is cooling. PC gaming is notorious for heat issues, so how do Alienware plan to combat that? Also: battery life. If the Nintendo Switch (which operates lower spec hardware) has a battery life of a few hours, how is the Concept UFO going to compare?

It’s hard to say without any technical information released by Alienware, but with the Concept UFO just a prototype that could be entirely redesigned or not released at all, its certainly a promising glimpse into what the future of PC gaming could hold. And, whilst there are problems like long term heating and battery life issues that need to be addressed, we were massively impressed by what we saw at CES, and can’t wait for further updates from Alienware concerning the future of the Concept UFO project.

Looking for more PC gaming and tech news from the floor of CES 2020? Check out or CES 2020 news page for the latest updates right from the show itself!