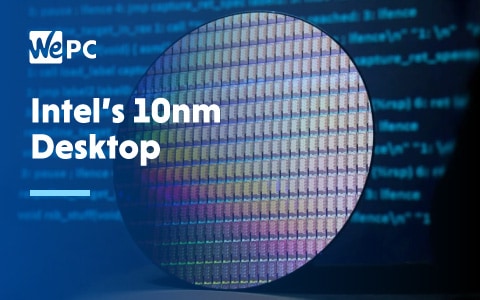 A rumor has been circulating about Intel’s decision to scrap the 10nm production process for its desktop CPUs. As far as we knew, they would be jumping straight from the 14nm+++ lineup to 7nm desktop processors.

While this was expected, given that Intel has run into recent problems with chip development and production yields – but we were expecting at least two years before this would happen.

Responding to the rumors, Intel has now promised that its “current roadmap of 10nm products includes desktop”.

This is finally some solid information among all the speculation.

Other rumors circulating have suggested that Intel’s desktop line will be stuck in 14nm lithography, the same used since Boradwell’s introduction in 2014.

With some suggesting that Rocket Lake-S processors will fit as another 14nm CPU for 2021, the upcoming Comet Lake-S will fill that time between now and then.

The problem with these rumors coming from unverified “insiders” means that it’s unlikely to be the full story. We should always approach rumors like this with a big grain of salt. However, the rumours did seem in line with existing expectations about Intel’s desktop plans.

The person at the forefront of rumors, “Insiderkreisen” highlighted that he has been proven right on multiple CPU rumors in the past. He went on further to say that Intel is struggling to hit required clock speeds for 10nm chips to hit the same previous performance as its 14nm silicon.

The good news is that Intel’s response clearly puts 10nm on desktop.

Intel went further and said: “The benefits in any new process technology are realized across different products to meet varying customer needs over time. For example, the new 10th Gen Intel Core processors (Ice Lake) for mobile clients are designed for outstanding graphics performance and deliver up to 2x graphics performance while maintaining platform power efficiency.”

One reason for these 10nm struggles can be put down to a new technique called Contact Over Active Gate (COAG). This was apparently behind the problems with Cannon-Lake CPUs. Given these past struggles for Intel, it’s more understandable that they might want to skip over 10nm and sit tight for new developments they have slated for release in 2022.

Intel will be using Comet Lake-S and Rocket Lake-S ranges, both of which are based on existing Skylake CPU architecture. This will be to plug the gap until Intel releases Meteor Lake in 2022. Sadly, this may come a bit too late as this will be three years after AMD is set to release their own 7nm CPUs. By the time 2022 comes around, we might have already had a whole year of 5nm chips from AMD – based on Zen 4 architecture.

There’s a reason AMD seems to be overtaking Intel. Intel will have a great deal of catching up to do in the future by the looks of it.

Meteor Lake’s architecture is still a little uncertain. We don’t know yet what Cores the 7nm Meteor Lake will have. Taking a wider look though, advanced Golden Cove design plus boosted AI and single-threaded performance boosts could give us some hints as to what to expect.

What Does This Mean For Tiger Lake Mobile Processors?

This could all be bad news for Intel’s mobile processors. Like Ice Lake, Intel might not look for a desktop equivalent of Tiger Lake. This would mean no Sunny Cove for desktop gaming rigs. It also means there will be no sign of that 15% IPC increase that laptop chips have seen.

We’re not sure why Sunny Cove can’t be back-ported onto 14nm lithography. For now, it looks like Intel’s desktop market is going to look relatively quiet on the chip design front. It could be another couple of years at least before we see some major developments, on par with AMD’s offerings anyway.