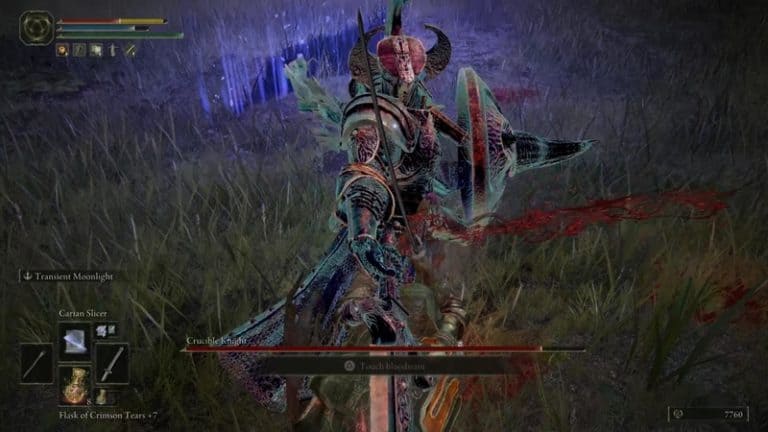 With few exceptions, the Crucible Knight is likely to be the hardest boss you encounter in Elden Ring’s Limgrave region. Boasting devastating attacks, a long reach, and even a second-stage power boost, this boss will likely cause you more trouble than either Margit or Godrick! Don’t worry though, we’ll help you take down the Crucible Knight with our Elden Ring boss guide.

How to find the Crucible Knight

The Crucible Knight can be found inside the Stormhill Evergaol. From the Stormhill Shack Site of Grace, ride south and then east onto the tip of the cliff. The Evergaol is easy enough to spot, despite the constant heavy winds.

How to beat the Crucible Knight

The Crucible Knight is a heavily armored foe with an impressive defense. But despite this, his reach is incredibly oppressive. The Knight will rarely grant you an opportunity to heal. You must ensure you have made as much space for yourself as possible before using your flask, otherwise, the Knight is likely to interrupt you and deal heavy damage to boot.

The Crucible Knight is capable of chaining multiple attacks together in quick succession. Never relax after a single sword swing, there are likely several more coming.

Despite his dedication to keeping his guard up, the Crucible Knight is vulnerable to being attacked from behind. If you have Sorceries available in Elden Ring, it is possible to use Homing Sorceries such as Magic Glintblade to break through this gap in the Knight’s defenses.

When defeated, the Crucible Knight will drop Aspects of the Crucible: Tail. A powerful incantation that allows you to mimic the Knight’s powerful tail sweep.