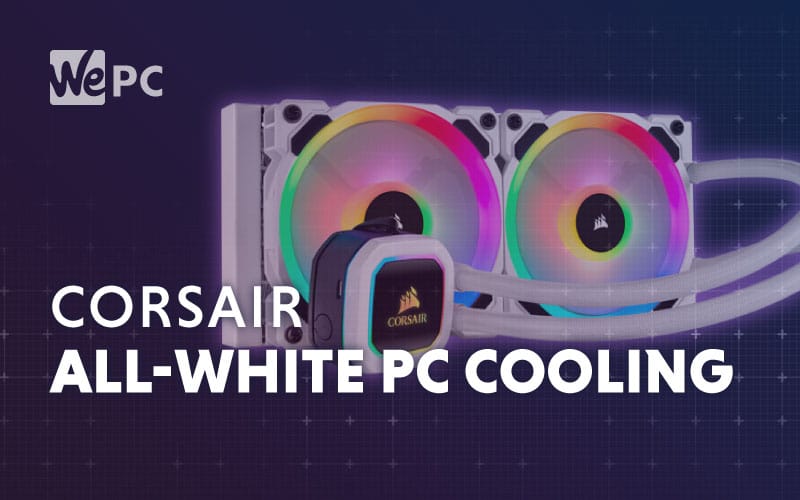 Corsair has recently released a number of high-quality cooling components in a beautiful white finish. This is perfect for those who are building with a theme in mind as these clean-looking components will put the finishing touch on any build.

You’ll now be able to get your hands on Corsair’s iCUE QL120 RGB series of fans as well as a custom water cooling setup in the form of the Corsair Hydro X Series.

The Components In Question

These sleek looking fans are one of the most impressive RGB units currently on the market. Each fan includes 34 RGB LEDs that illuminate each fan through four light loops – two in the front of the fan and one at the rear. This means that it doesn’t matter if you are using these as an intake or exhaust fan, you’ll be able to see the impressive lights easily enough.

These lights can be purchased in either a single or multi-fan kits of either 140mm or 120mm sizes. If possible, you’ll want to pick up one of the multi-kits to grab the bundled Corsair iCUE Lighting Node controller which allows you to fully customize and synchronize the fan’s lighting.

These are available now from £29.99 for a single fan and £99.99 for the triple fan kit which includes the Lighting Node CORE.

If you want to include a custom cooling solution in your system, the Corsair Hydro X Series will let you build a great high-performance cooling system in a sleek titanium matte white finish.

The XC7 RGB CPU Water block is compatible with both Intel LGA 115X and AMD AM4 processors. It comes with a nickel-plated copper plate and more than 60 micro-cooling fins. The RGB lighting takes form with 16 individually controllable RGB LEDs which you can customize any way you want.

The XD5 RGB Pump/Reservoir Combo will power your custom cooling setup with a Xylem D5 PWM pump built into a 330ml reservoir. The lighting on this setup is taken care of with ten RGB LEDs that can be individually controlled.

If you are building on the smaller-size of things and want to keep a clean look throughout, the newest addition to the Hydro X Series is the way to go. The XD3 RGB Pump/Reservoir combo doesn’t lose any performance from its smaller size. With the Xylem DDC PWM pump measuring in at only 114mm x 114mm x 58mm, it will easily fit in most small form factor cases.

By also including 16 individually addressable iCUE-controlled RGB LEDs to bring life to your 180ml reservoir, you’ll be able to customize this cooling setup in any way you see fit.

If you’re in the market for a smart, sleek-looking cooling system, you can’t go wrong with Corsair’s white cooling series. Not only will you get an impressive product in terms of functionality, but the impressive look alone makes it worthy of a place in your current build.