Unseat this patrolling boss with our Elden Ring guide 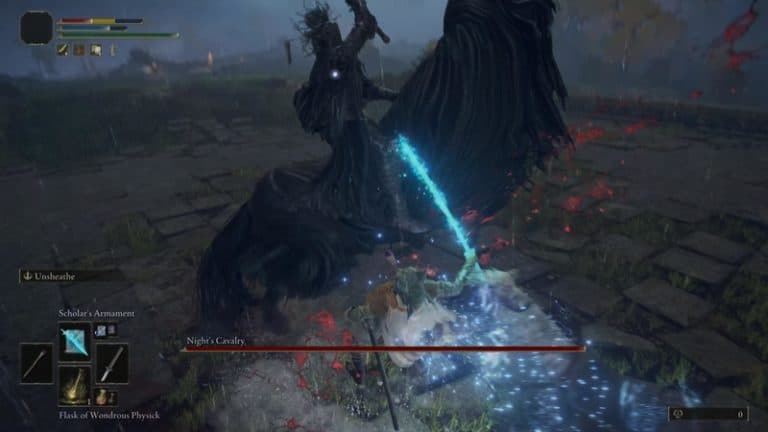 Elden Ring is packed full of bosses, optional and otherwise. Many of these powerful foes lurk in plain sight, ready to humble any tarnished getting too big for their greaves. But some bosses are sneakier, only showing up when specific conditions are met. In fact, a hidden boss in the Limgrave region might have been hiding right under your nose, if you haven’t been fully exploring Elden Ring’s day/night mechanics. We’ll show you how to find and defeat the Night’s Cavalry boss with our Elden Ring guide.

During the day, the main bridge in the center of Limgrave is patrolled by a Kaiden Sellsword. A fearsome foe to be sure, but hardly boss material. When night falls, however, in the sellsword’s place is a terrifying figure in black armor, astride a deathly mount. This is the Night’s Cavalry.

For players not wanting to wait around for time to naturally pass, don’t worry. It is possible to change the time of day at any point by choosing the menu option at a Site of Grace.

It is important to note, if you die to the Night’s Cavalry boss, time will advance to morning. Thankfully, there is nothing stopping you from switching it back to nightfall and riding out to try again right away.

How to beat the Night’s Cavalry boss

When facing him on foot, the Night’s Cavalry is a deadly opponent. With dangerous wide-ranging swings, and an ability to ride swiftly away from your attacks, it will feel as if you are very easily outmatched. Therefore, it is better to meet the Night’s Cavalry on even terms.

Summon Torrent, and suddenly the fight with the Night’s Cavalry becomes a fast-paced horseback battle. While the boss’s attacks are still very harmful, Torrent allows you to dodge them much more easily, and outpace the boss to boot.

It is possible to not only damage the boss but its mount too. If the mount is killed, the Night’s Cavalry will be dismounted. This will allow you to get several more hits in before the boss re-summons his steed.

Defeating the Night’s Cavalry boss will grant you 2400 Runes and the Repeating Thrust Ash of War.