Home » Gaming » Minecraft » How to make a saddle in Minecraft

How to make a saddle in Minecraft 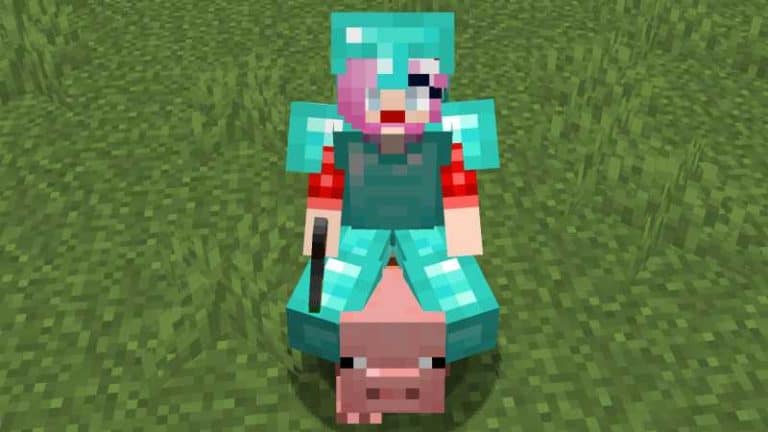 So, one big question that Minecraft players have is, “How on earth do you make a saddle?” The reason this stumps so many people is that, despite the game having “craft” in the title, there are some things you just can’t get from a crafting table. Saddles, sadly, are one of them. This just adds to the fun, though, as you need to go out and find one instead. So, since there’s no Minecraft saddle recipe, how do you find a saddle in Minecraft?

How to get a saddle in survival Minecraft

We’ll go through the different ways of obtaining a Minecraft saddle below. As mentioned, you cannot make a saddle in vanilla Minecraft, but there are actually a lot of other ways to find them, so it shouldn’t be too hard to get your hands on a couple fairly quickly.

Fishing for saddles in survival mode

One of the easiest – if more time consuming – ways to find a saddle in Minecraft is simply to fish for one. What’s more, you can craft a fishing rod pretty early game, simply with three sticks and two strings. A saddle is classed as “treasure” in the Minecraft fishing loot tables, so it is a rare find, but at least you’re earning other items and XP all the while… and you can stay pretty safe, too. In order to increase your chances of fishing up a saddle in Minecraft, you can always add Luck of the Sea to your Fishing Rod – an enchantment that increases the chance of catching treasure.

Trade with a Villager for a saddle in Minecraft

According to the Minecraft wiki, Master-level leatherworker villagers have a 50% chance of selling a saddle for six Emeralds in the Bedrock edition. In Java Edition, a leatherworker always sells a saddle at this level. Master-level is the final stage in a villager’s levelling, so you will need to trade with the leatherworker quite a few times in order to reveal their Master-level trades. If you are going for some in-game retail therapy, check out our guide on earning Emeralds fast.

Where to find saddles in Chests

One of the best ways of finding some of Minecraft’s greatest treasures is actually in the many chests scattered across the Overworld, Nether and End (although it might be a bit late for a saddle by the time you get there). Saddles are no different and can be found in most of the structures that can be generated in your survival world.

Below are the locations at which you might find a saddle, and the chance of finding a saddle in a treasure chest there. These are the most recent figures for 1.18, but there are some very slight differences if you’re playing in older versions of Minecraft.

In case you’re unsure if you’re Java Edition here’s a quick guide. You will be Bedrock Edition if you are on a console; Nintendo Switch, Xbox One, Xbox Series X|S, PS4 and PS5 (now) only play Bedrock Edition Minecraft. While the mobile version of the game is more widely referred to as its old name, Pocket Edition, that too is a version of Bedrock. Java Edition is only available on PC. Just to confuse the issue, though, Bedrock and Java are both available on PC, you’ll know which you are playing from the Minecraft Launcher. You’ll either be launching “Minecraft: Java Edition”, or “Minecraft for Windows”, the latter being Bedrock. You might, if you own both or are playing through Xbox Game Pass, have both versions on your PC. Both are available through the same launcher and, again, you’ll know from which you click on as to which you are playing.

If you own either Windows 10 Edition or Java Edition on your PC, Microsoft will be gifting you the other version sometime around Summer 2022.

Feeling brave? Get a saddle from a Ravager

Finally, if you happen to find yourself in the middle of an Illager raid, you might actually be able to get yourself quite a few saddles. While Ravagers can only be ridden by Illagers and not players, they still spawn with a saddle on their back. Upon death, all Ravagers will drop a saddle for you to collect. This is probably the most dangerous way of collecting saddles, but also probably the most fun. If you survive.

How to get a saddle in Creative mode

Of course, when playing in Creative mode, you won’t have this problem. Every item imaginable (as long as it’s already in Minecraft) is available straight from the get-go in creative Minecraft. Simply open the item list, search for “saddle”, and get riding. Having said that, there isn’t a huge amount of need for a saddle in creative Minecraft, as you can fly around your world – far easier than getting that horse up that mountainside.

What is a saddle used for in Minecraft?

As I’m sure you could probably expect, a Minecraft saddle is used to ride mobs. However, you might be surprised by just how many mobs a saddle can be used on.

How to put a saddle on a horse, mule or donkey in Minecraft

The process for saddling a horse in Minecraft is actually quite simple. You just need to tame and mount it first. To tame a horse, keep pressing the Use Item button until you see hearts appear. If you don’t see hearts, you can tell whether the horse is tamed or not by clicking your inventory button while on the horse’s back. If it opens the horse’s inventory, the horse is tamed.

Once you have opened the horse’s inventory, simply drag the saddle from your inventory into the horse’s, and you will now be able to control the horse’s movements. This method is exactly the same for similar Minecraft mobs donkeys and mules. Again, tame the mob by mounting it until it lets you stay, and then placing the saddle into the animal’s inventory.

How to saddle a pig in Minecraft

Saddling a pig is far simpler than putting a saddle on a horse as you don’t need to tame it first, and you don’t need to be riding it at the time. Instead, simply walk up to a pig with a saddle in your hand, and click the Use Item button whilst pointing at the pig. Unlike riding a horse, this will not yet allow you to control the pig’s movement. Instead, you will need an extra item – a Carrot on a Stick. Holding a Carrot on a Stick when riding a saddled pig will allow you to control its movements by looking where you want the pig to go.

How to ride a Strider in Minecraft

Saddling a Strider is pretty much the same as the process of putting a saddle on a pig. With the saddle in your hand, approach the strider and click the Use Item button while looking at it. At this point, you will be able to see the saddle on the Strider’s back, and clicking Use Item again while pointing at the Strider will cause you to mount its back.

Despite having mounted the Strider, you still won’t be able to control its movement with just a saddle. Like the carrot on a stick for a pig, you will instead need a Warped Fungus on a Stick. With this item in your hand whilst riding a Strider, you will be able to face the direction you wish to travel and the Strider will follow.

Unfortunately, you can’t ride a Llama, or any other mobs with a saddle at this time. You can, however, put chests on a Llama to give it inventory space, and then lead it – or multiple – around on leads to increase your mobile storage!

For more help in succeeding in survival Minecraft, check out our Minecraft hub, full of useful guides like how to use a blast furnace and how to grow Nether Wart. 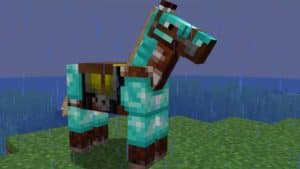 How to breed horses in Minecraft – and tame them too 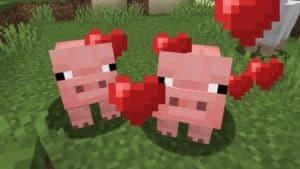 How do you breed animals in Minecraft?