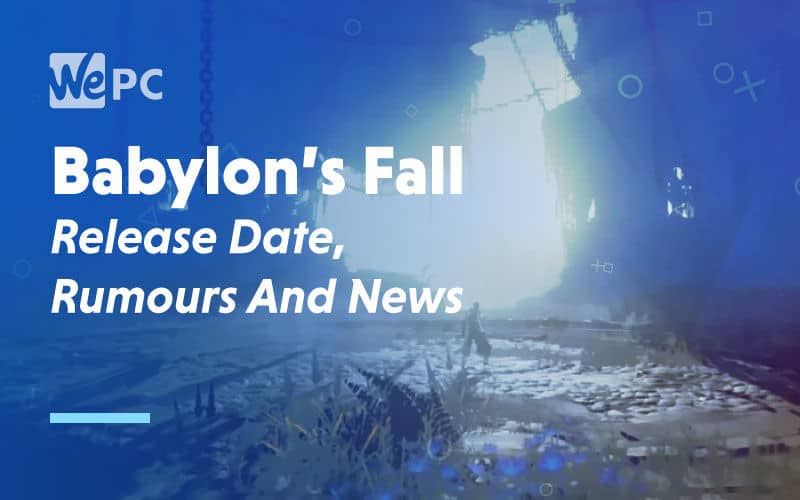 Few unreleased titles are quite as mysterious as PlatinumGames’ little talked about Babylon’s Fall. It promises action gameplay of the same ilk as the developer’s standout titles Nier: Automata and Astrai Chain, but beyond a somber, gothic world, and two tantalizing short trailers, there’s not much to go on.

As it stands, we don’t currently have a firm release date for Babylon’s Fall. The game was initially slated for 2019 when Square Enix first unveiled it during its presentation at E3 2018. However, in the interim, we’ve heard very little, including a notable absence at this year’s edition of E3. As we approach the end of 2019, it’s safe to say the initial release window may have been a little too ambitious.

Radio silence has defined Square Enix’s communication around Babylon’s Fall, that is, until the final edition of PlayStation’s State of Play broadcast for 2019, where the action game made an appearance armed with a brand new trailer and the promise of more details in the future. The trailer ends by letting viewers know that they can expect more news this summer, presumably at E3.

The fact Square Enix feels comfortable parading the game during such a high profile broadcast suggests development is nearing its end or at least developer PlatinumGames is making strides after an initial delay. Hazarding a guess, 2020 seems the most likely candidate for a release.

We know for certain that Babylon’s Fall is heading to both PC via Steam and PlayStation 4.

As of writing, there are two Babylon’s Fall trailers in existence. The first, found below, was shown during E3 2018 when Square Enix first announced the game.

It’s a somewhat cryptic affair framed as a chronological timeline with the mention of bleak events such as The Oversoul Prophecies, The Apocalypse, The Soul Riots, and Divine Punishment. Heavy gothic undertones pop out thanks to what we presume is concept art and snaps of ancient frescoes. A short cinematic sequence rounds of the trailer with a brief skirmish between two characters.

The second was showcased during PlayStation December 2019 State of Play. Here it is below.

With it, we get our first look at gameplay footage, or at least stylized gameplay – fast-paced combat, aerial moves, towering structures, and some gritty looking enemies.

From the second trailer, it isn’t unreasonable to presume that Babylon’s Fall will be through and through an action title with a heavy focus on combat. PlatinumGames’ action pedigree lends itself to this as well.

With divine themes and a world on the brink of collapse, we imagine simple swords won’t cut it, so some form of higher power intervening to aid out in combat may be on the cards. The presence of light effects linked to aerial attacks, charged attacks, and combos suggests this as well.

We can also expect an array of enemies ranging from basic mobs to colossal bosses as the trailer shows with lanky foot soldiers, scarab-like creatures, and a giant knight armed with a massive serrated blade.

The timeline on show in the first trailer suggests we may also be in for some time hoping and a story that spans centuries.

Square Enix is keeping its cards close it its chest, so there’s very little in terms of news other than the promise of more news in Summer 2020. So, news of news.

A description on the PlatinumGames website does say ‘originally announced with a 2019 release date, Babylon’s Fall has been rescheduled; more information regarding its release date will be available soon’.

What ‘soon’ means is up in the air, but we may get snippets of news in the lead up to ‘a full look at the latest challenge that PlatinumGames is taking on together with Square Enix’ as the website puts it.

As you can probably tell by now, Babylon’s Fall remains an elusive beast in its current form. Unfortunately, we still have some waiting in-store before we find out more. But, our patience may be greatly rewarded if PlatinumGames can match the action delights of 2017’s phenomenal Nier: Automata.