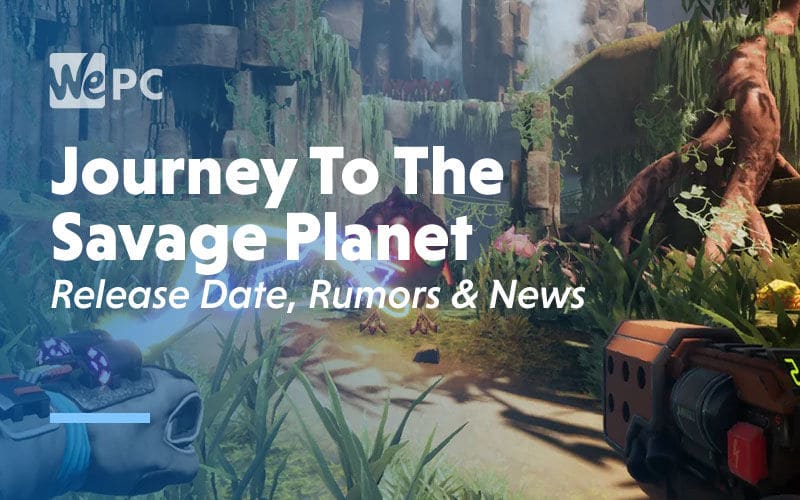 Typhoon Studios is not only among the select few studios picked by Google Stadia but also the developer behind the upbeat upcoming first-person action-adventure Journey to the Savage Planet.

Journey to the Savage Planet is penciled in for release on January 28th, 2020. The game is being published by 505 Games and is set to launch on PC via the Epic Games Store, PlayStation 4, and Xbox One simultaneously.

Journey to the Savage Planet Trailer

There are currently three trailers for Journey to the Savage Planet.

The first trailer was showcased during The Game Awards 2018 and stands as the reveal teaser for the game. Quirky and cinematic, it offers our first look at Journey to the Savage Planet. Some form of disaster leads us to strewn corpses, a crashed space vessel, and an alien world. It’s short and sweet.

Typhoon Studios then released a further environment teaser in early 2019, showcasing the world on offer. Strange alien creatures, colorful biomes, and an upbeat voice-over define this one. Playful and silly, it gives us a strong impression of the overarching tone of the game.

This was followed by an appearance at E3 2019 with a gameplay trailer. Much more of the titular savage planet is showcased, including a look at the humor set to define the game. We also get a look at the game’s four unique biomes featuring verdant grasslands, snowy ridges, lava caves, and a swamp-like area. The trailer also showcases some of the game’s mechanics, including combat, exploration, and the use of various appropriately space-themed tools.

A final trailer was released in August 2019, offering yet another look at the game’s more bizarre facets and vibrant world. Framed as a communication from a corporate space exploration company, the trailer is essentially a list of all the game’s features, including co-op, crafting, upgrades, and more alien creatures.

Journey to the Savage Planet Gameplay

Firmly rooted in the action-adventure genre, Journey to the Strange planets is a marriage of exploration, combat, and crafting merged into a game focused on getting to the bottom of the mystery hanging over the seemingly uncharted lands of planet AR-Y 26. As the trailers explain, the player jumps in under-equipped and will have to use found resources to craft better equipment thanks to a 3D printer.

Players can jump in alone or join up with a friend for co-op play. Much of the gameplay revolves around completing quests pushed forward through exploration and the discovery of over 30 unique alien creatures. Each of the creatures is not only unique in appearance but will approach the player differently with varying degrees of aggression. Some are friendly, others openly hostile, and each will react to player action and provocation in different ways.

Distinctly lighthearted, Journey to the Savage Planet is very much creating an upbeat atmosphere where oddities and humor stand as defining factors.

The achievements list for Journey to the Strange Planets was released recently and it features 44 trophies. In keeping with the tone of the game, these are as bizarre as you’d expect with titles such as Flipping’ The Bird and What Would You Two Maniacs Like To Do First?

With the release of Journey to the Savage Planet creeping ever closer, we don’t have too long to wait to sample the delights of Typhoon Studios’ first effort. Google clearly sees the merits of the studio, which bodes very well for the quality of this title.